The Yanks and Poles are applying pressure on the Outpost of Tyranny #6 and Belarus is already complaining! 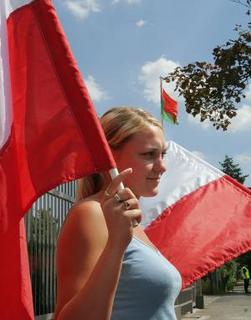 The US House of Representatives approved $24 M to promote democracy and develop political parties in Belarus this week.

The bill on financing the U.S. foreign policy in the years 2006-2007 was passed by 351 vs 78 votes, the House of Representatives Secretariat reported.

In particular, the document authorizes the U.S. government to spend $24 million on assistance in building democracy in the former Soviet republic of Belarus, promoting free elections, development of political parties and independent media, protection of human rights and ensuring rule of law in that country. 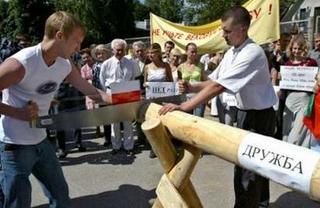 Young Pro-Belarussian demonstrators cut a log symbolizing the Polish-Belarussian friendship at a rally in Minsk on Tuesday. (Reuters)

On Thursday, Andrzej Pisalnik, informal spokesman for an ethnic Polish group in Belarus, was found guilty of taking part in an unlicensed demonstration and sentenced to 10 days in jail. The action is the latest development in a dispute between the Polish minority in Belarus and the government of President Alexander Lukashenko. Earlier this week, another official of the group, Veslaw Kewlyak, received a 15 days jail term on charges of “illegally” meeting a visiting Polish parliamentarian.

About 400,000 ethnic Poles live in Belarus, mainly in areas that were part of Poland until World War II. Presidential elections are expected as early as 2006, and Polish political analyst Krzysztof Mularczyk says Mr. Lukashenko fears growing resentment toward him among Poles and other groups.

One of the Poles arrested, Andrzej Pisalnik, began a hunger strike yesterday.

Kirk H. Sowell from Publius Pundit has more on the arrests and links to the article from Le Monde where the attached protest picture was seen.

And, Robert Mayer from Publius Pundit wrote about a Polish “Rock the Regime” concert yesterday.