17 die and hundreds are injured in weeks of violence in Iranian Kurdistan. 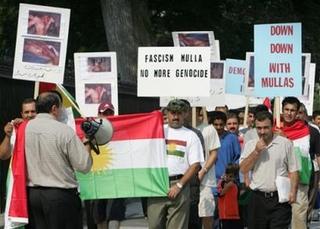 Kurds in Washington, DC (and in Finland) this week protested to end the violence against the ethnic Kurds in Iran. This is the 35th day of the uprising in Western Iran.

But, Sunday Iran also blamed the US for the clashes and violence in the western Kurdish area:

Iran accused Britain and the U.S. of instigating recent ethnic clashes involving the country’s Kurdish and Arab minorities. “We have information that the U.S. is interfering in the northwest of Iran. That is unacceptable and we are going to protest,” said Foreign Ministry spokesman Hamid Reza Asefi.

“According to our reports the English have interfered in the troubles in Khuzestan and some (agitators) have been trained in bases under British control in Iraq,” he added.

The province of Khuzestan, where there is a large ethnic Arab community, and the Kurdish areas of northwestern Iran near the Iraqi and Turkish borders have been rocked by violence in recent months that has left a number of people dead. 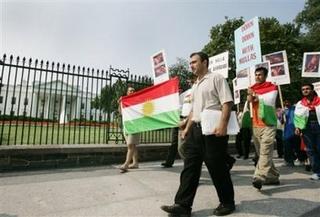 American Kurdish Union members protest in front of the White House, Thursday, Aug. 11, 2005, about what they say are atrocities being committed by the Iranian government against ethnic Kurds. (AP)

These protests in northern Iran are the largest protests in Iran since the 1979 Islamic revolution when Kurdish rebels fought Iranian officials for autonomy.

Human Rights Watch is calling for an investigation into the killings from last week.