Thousands Protest for Democracy in Nepal 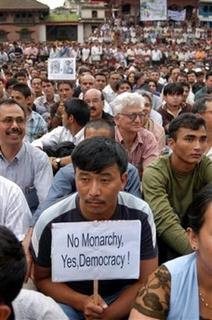 Hundreds of people rallied against King Gyanendra in Katmandu, Nepal on Tuesday. (AP)

More than 3,000 protesters took part in the sit-in protest in Kathmandu on Tuesday:

The protesters on Tuesday squatted in the street at Basantapur Durbar Square for several hours and disrupted traffic.

Demonstrators included members of the Peace Society of Nepal, supporters of the country’s seven main parties, artists and writers.

The protest was called by a group called the Citizen’s Movement for Democracy and Peace, said one of the organisers, Mathura Shrestha.

The protestors carried placards reading “Monarchy no, Democracy yes” as well as banners denouncing the king’s seizure of power in the Himalayan kingdom. 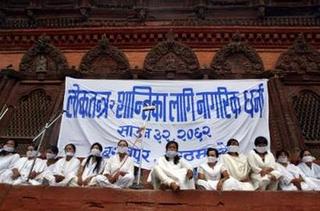 Women dressed in traditional white for mourning protest in Katmandu on Tuesday. (Reuters)

Activists are asking the UN to monitor the human rights conditions in Nepal since the King took absolute control over society on February 1:

Since King Gyanendra took over direct rule of Nepal six months ago on 1 February, at least 1,115 people have been killed according to a report published by Insec, a local human rights group. The report says 738 have died at the hands of the state and 377, including both civilians and security personnel, have been killed by Maoist rebels.

As a result, activists have become increasingly concerned over the human rights situation and are asking when the Nepal-based Office of the United Nation High Commissioner for Human Rights (OHCHR) will begin active field work as per its mandate. Nearly four months have passed since OHCHR and the Nepalese government signed an agreement to allow a UN human rights monitoring mission in the Himalayan kingdom. 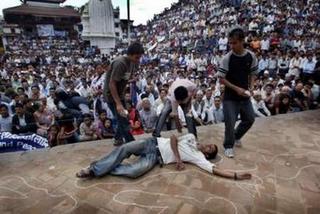 Suspected Maoist rebels shot and wounded a policeman and bombed a police post in separate incidents Tuesday on the outskirts of Nepal’s capital Kathmandu, police said.

A head constable was in serious condition after being shot by gunmen at Gokarna on the eastern edge of Kathmandu, a police official said. A police post in Lalitpur district just south of the capital was bombed in a pre-dawn attack.

“A group of suspected armed Maoists stormed the police post at around 4.00 am Tuesday and destroyed the building by bombing it,” the official said.

Paramendra Bhagat at For a Democratic Nepal blog has many more pictures of the demonstrations.