The Giant Teapot came crashing down on Sunday! 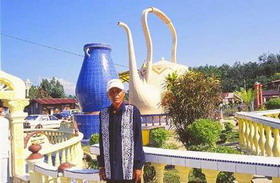 Ayah Pin, formerly known as Ariffin Mohammed, stands in front of his “Teapot Commune” in Malaysia. The commune was destroyed by the Islamic government yesterday. Ayah Pin to his followers, is a reincarnation of everyone from Shiva to Buddha or from Jesus Christ or to Mohammed.

Ayah’s children were unfazed by the teapot’s destruction:

The giant teapot and other key structures at the Sky Kingdom commune came tumbling down yesterday after the Besut District Council sent in it’s demolition squad.

More than 30 followers of the sect, who watched the demolition, did not resist or challenge the authorities.

Several children of sect leader Ariffin Mohamad, known as Ayah Pin to his followers, were among those who watched the Sky Kingdom symbols crashing to earth.

Asked what she thought of the council’s move, daughter Nor Hashide, 20, replied: “Tak tahu (Don’t know).” 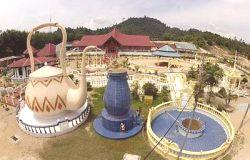 La Bona at Divine Talk sent me more on the Teapot Commune Persecution:

In 2001, the Malaysian authorities jailed Ayah Pin for 11 months for attempting to renounce Islam. He is viewed as a security threat and they continue to harass him with all sorts of uncivilized threats befitting the low-life including smashing up the lovely giant teapot and flattening the commune, which they just did yesterday!

Prior to the destruction yesterday, the authorities raided the commune in July, 2005 and detained 45 faithful including a Kiwi, senior citizens and among others, 3 children of Ayah Pin and his 3 wives. I read somewhere; there are kids left behind unattended in commune and while some faithful have to pawn all they have to bail themselves out, the rest are still in custody.

Their crime: Being un-Islamic! 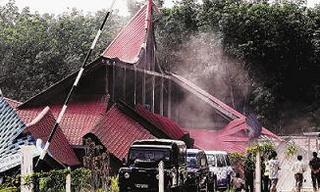 Among those to go were a teapot, yellow umbrella, guest house, assembly hall and “Noah’s Ark.”

However reporters and photographers who had gathered near Ariffin Mohamad’s commune since 8.30 am, were barred from entering the operational area.

The police also stopped the public from entering the area.

More than 30 followers of the sect, who watched the demolition, did not resist or challenge the authorities. 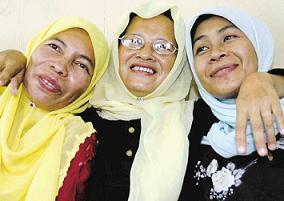 The three wives of “Sky Kingdom” sect leader Ariffin Mohamad, or Ayah Pin, were charged in the Syariah Lower Court today with not adhering to the state fatwa which had ruled that Ayah Pin’s teachings were deviant.

The three women would be charged at the Lower Syariah Court here Monday under Section 10 of the Syariah Criminal Offences (Takzir) (Terengganu) Enactment 2001 for disobeying the order of the religious authorities by being involved with the deviationist sect’s teachings.

Divine Talk has much more on this sad story!