** The Real Cindy Sheehan, the one the liberal media does not want you to see! **

– “America has been killing people, like my sister over here said, since we first stepped on this continent.”

– “We have been responsible for death and destruction.”

– “It’s OK for Israel to occupy Palestine, yeah,… and it’s OK for Iraq no, for America to occupy Iraq, but it’s not OK for Syria to be in Lebanon. They’re a bunch of f**king hypocrites!” 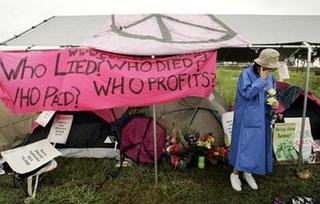 This from the AP– Her simple, quiet protest of the war that took her son’s life is gaining momentum as dozens joined her Wednesday at the site. Sheehan, 48, has insisted on speaking to Bush and vowed to remain during his ranch stay through the end of the month. Her tenacity has gained the support of anti-war groups, with one activist calling her ‘the Rosa Parks of the anti-war movement. (Quiet? Simple? Rosa Parks?)

Frank Rich in the Sunday New York Times wrote “The Swiftbating of Cindy Sheehan” opinion piece. Frank was right on with his description of the media frenzy surrounding “Mother Sheehan”.

When these setbacks happen in Iraq itself, the administration punts. But when they happen at home, there’s a game plan. Once Ms. Sheehan could no longer be ignored, the Swift Boating began. Character assassination is the Karl Rove tactic of choice, eagerly mimicked by his media surrogates, whenever the White House is confronted by a critic who challenges it on matters of war. The Swift Boating is especially vicious if the critic has more battle scars than a president who connived to serve stateside and a vice president who had “other priorities” during Vietnam.

That’s quite a mouth full of liberal talking points in that one paragraph alone. Be assured the rest of his piece is more of the same. It is funny how the dreaded Karl Rove is now involved in the Cindy Sheehan fiasco, too, somehow.

But, the real brilliance in this piece by Frank Rich is the one small bit of honesty that is written right there in the headline. “Cindy Sheehan and Swiftboats”… The similarity between the two stories is uncanny!

So, Frank Rich is absolutely correct. This is “The Swiftboating of Cindy Sheehan!”