THE STORY OF “THE GREAT RAID” WILL BE OUT IN U.S. THEATRES AUGUST 12TH!
IT OPENS IN THE PHILIPPINES ON AUGUST 10TH.
THE MOVIE TRAILER IS HERE

The Philippines waits anxiously for the release of this historic film!

This is the Philippine’s opportunity to share with the US the horror and the heartache of war, and the extreme courage of a heroic team of Americans and Filipinos. It is also an opportunity for the Philippines to proudly introduce its emerging artistic talent to the world stage. 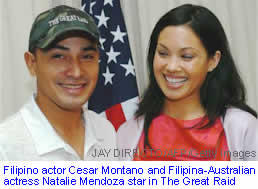 American Rangers and Filipino Guerillas joined together over 50 years ago in World War II to rescue the remaining soldiers from the Bataan Death March. Now, “The Great Raid” gets young US and Filipinos together again to replay this historic rescue in a new film:

The film is based in part on the novel by author Hampton Sides, titled Ghost Soldiers. In this well-researched and fascinating book Sides describes in riveting detail how a group of brash Army Rangers risked their lives to rescue the last remaining soldiers of the Bataan Death March from the Japanese POW camp.

The rescue mission, which was made up of approximately 200 American Rangers and 150 Filipino Guerillas, is sadly just one of the many shining moments of courage and valor that has been, for the most part, forgotten by both Filipinos and Americans alike. 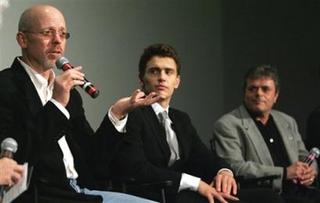 Director John Dahl, left, talks about his new movie, ‘The Great Raid,’ as two of the film’s actors James Franco and Joseph Fiennes, right, listen in at a Los Angeles showing. (AP)

To understand the absolute horror of this event here is some more background:

In 1942, 70,000 American and Allied soldiers surrender to Japanese captors in the Philippines. Thousands die of malaria and exhaustion during the Bataan Death March, when they’re forced to walk barefoot 55 miles through the jungle. For the next three years, survivors of the march, dubbing themselves Ghost Soldiers, are starved, tortured and in some cases executed in prison camps.

It only gets worse: In the waning days of the war, defeat imminent, Japanese captors douse prisoners in gasoline and burn them alive as part of the Japanese War Ministry’s “Kill All Policy.”

The Philippines is very proud of their exceptional actors in the film and one actor, Cesar Montano, is heading to Hollywood to discuss some more movie offers since “The Great Raid”. Here is what the Manila Bulletin is saying:

Our very own award-winning actor/director Cesar Montano came back last Thursday from Washington, DC where he attended the premiere of his international movie “The Great Raid.” Of course, he was very excited to share with us his experience, reuniting with his co-stars especially the lead star of the movie, Benjamin Bratt who calls him “my Brown Bro,” and who refers to him as the “Tom Cruise of the Philippines.”

Here is more on “The Great Raid” from a post yesterday.

Oliver North, in his War Stories series told the story of the “Bataan Death March” and the “Great Raid” last night on his Sunday episode.

Update: (Friday, August 19th) Scott Johnson from Powerline has an article up on the Daily Standard today, “To Bataan and Back”, talking about the misguided negative reviews from the mainstream press. You must check it out.

Scott must rank pretty high these days. The Weekly Standard even has his caricature up next to his post!