HOW THE MARINES TOOK FALLUJAH, VIDEO HERE
(Please, do not bother to watch this if you have a weak stomach or are liberal and get upset about national defense.) 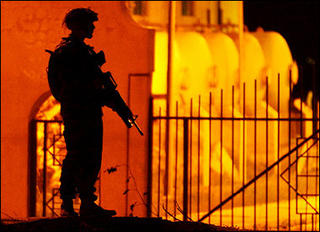 Dale P. relates this wonderful story and some lessons:

When in VN, thousands of miles away from the warmth and safety of my home, with strange calls in the night, I was scared too. I wondered why for many things. We all did. And, when one of our fellow comrade in arms was killed, we wondered even more. But then, it would take someone like Rick Rescorla, to break that concentration away from the fear that may grip us when we realize there are hundreds of men very close by who want to kill us, Rescorla sang. Mostly he sang dirty songs that would make a sailor blush. Interspersed with the lyrics was the voice of command: “Fix bayonets…on liiiiine…reaaaa-dy…forward.” It was a voice straight from Waterloo, from the Somme, implacable, impeccable, impossible to disobey. His men forgot their fear, concentrated on his orders and marched forward as he led them straight into the pages of history

He died on 9/11, but he and men like him fought then and now. I cannot say enough and do not have the words to make the point of why and how we must continue until we win. Rescorla gave courage to face the coming dawn. He said, ‘When the sun comes up, we’re gonna kick some ass.’ ”

Just in the last few weeks, polls are beginning to indicate some eroding of the support. If this is REALLY the case, then there is a job to do, and perhaps, the blogosphere, is the only way to get the points across as they have been trying to do – at least on the conservative side. The pace and rhetoric needs to be picked up alot! People NEED to understand, despite the blathering from the left, that we are in REAL trouble if we do not continue the fight.

And that is what we have to do and what the Marines always do!

Update: (1:30 PM CST) Ace gives the video one thumb up, one thumb neutral.
Blackfive weighs in.

Update: (Wednesday PM) If the video does not play for you, may need to come back to check it out. Or, go to Open Fire to see this and more like it!