Is it too much to ask the media to report on a wonderful story like this from Comfort, Texas? Why instead does the media see the importance of the Cindy Sheehan story? Why does Cindy’s story get headlines at the New York Times? Why is her story treated as the normal grieving military mother when it is the great exception to the rule? The family of Cindy Sheehan is speaking out against her behavior. So, why then, does the media continue their non-stop coverage of these few protesters outside Crawford, Texas at a muddy campsite? 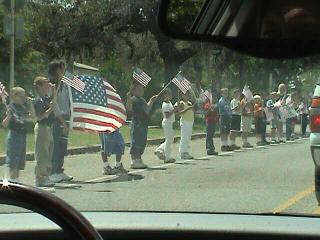 “I’m back, it was certainly a quick trip, but I have to also say it was one of the most amazing experiences of my life. There is a lot to be said for growing up in a small town in Texas. The service itself was impressive with wonderful flowers and sprays, a portrait of James, his uniform and boots, his awards and ribbons. There was lots of military brass and an eloquent Baptist preacher. There were easily 1000 people at the service, filling the church sanctuary as well as the fellowship hall and spilling out into the parking lot. 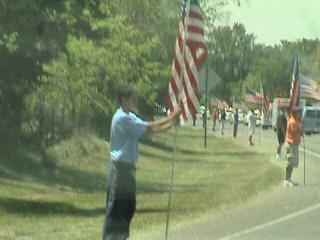 However, the most incredible thing was what happened following the service on the way to the cemetery. We went to our cars and drove to the cemetery escorted by at least 10 police cars with lights flashing and some other emergency vehicles, with Texas Rangers handling traffic. Everyone on the road who was not in the procession, pulled over, got out of their cars, and stood silently and respectfully, some put their hands over their hearts. 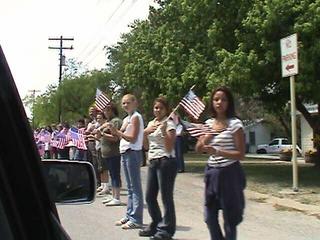 When we turned off the highway suddenly there were teenage boys along both sides of the street about every 20 feet or so, all holding large American flags on long flag poles, and again with their hands on their hearts. We thought at first it was the Boy Scouts or 4H club or something, but it continued …. for two and a half miles. Hundreds of young people, standing silently on the side of the road with flags. At one point we passed an elementary school, and all the children were outside, shoulder to shoulder holding flags . kindergartners, handicapped, teachers, staff, everyone. Some held signs of love and support. Then came teenage girls and younger boys, all holding flags. Then adults. Then families. All standing silently on the side of the road. No one spoke, not even the very young children 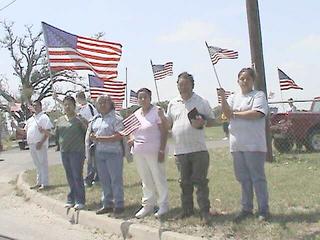 The military presence..at least two generals, a fist full of colonels, and representatives from every branch of the service, plus the color guard which attended James, and some who served with him … was very impressive and respectful, but the love and pride from this community who had lost one of their own was the most amazing thing I’ve ever been privileged to witness.

I’ve attached some pictures, some are blurry (we were moving), but you can get a small idea of what this was like. Thanks so much for all the prayers and support.”

– A message from Vicki Pierce about her nephew James’ funeral who was serving our country in Iraq courtesy of Richard Johnson & Ray Wallace.

* A Big Thanks to Adam Smith who sent me this story. *

These were actual photos taken at the funeral for US Army Specialist James M. Kiehl, 507th Maintenance Company, Fort Bliss, Texas. He was killed in action on March 23, 2003 at An Nasiriyah, and served in the same unit as PFC Jessica Lynch and SPC Shoshanna Johnson who were captured during the same engagement that resulted in Specialist Kiehl’s death. His hometown was Comfort, Texas. Comfort is about 40 miles Northwest of San Antonio, Texas.

The Anchoress is showing her brilliance with her analysis of the Code Pink/Cindy Sheehan story.

Update: You have got to check these pictures out! Greg, at “Deep Down in Texas”, has some terrific photos from his afternoon drive down to Crawford to check out the Code Pink/Cindy Sheehan/MoveOn/Crawford Peace House campsite. Greg did an excellent job capturing the mood of the demonstration! Some protesters were having problems with fire ants. I am glad that Greg decided to stay in his car. Fire ants are no joke. Good move, Greg!