Sikhs hit the streets of New Delhi in protest to a recent government decision this week. An effigy of some official was burned during the protest. 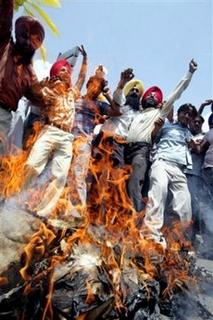 Sikhs in India were demanding that the government prosecute an official in the deaths of over 3,000 Sikh’s in 1984:

Both houses of India’s parliament have been forced to adjourn due to protests following the release of a government inquiry into the 1984 anti-Sikh riots.
Opposition members are demanding the prosecution of members of the governing Congress Party over the riots in 1984.

The government says there is not enough evidence to prosecute a serving minister named in the report.

The riots, sparked by the assassination of Prime Minister Indira Gandhi by Sikh bodyguards, left more than 3,000 dead.

The Sikhs say thay will continue to protest the “white washed report” and they would call on President A.P.J. Abdul Kalam to express its shock over the exoneration of all accused in the riots that followed the assassination of then Prime Minister Indira Gandhi.