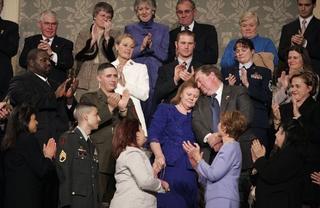 During the State of the Union Address on Wednesday, Feb. 2, 2005, Janet and William Norwood, center, comforted each other as President Bush talked about their son, Marine Corps Sergeant Byron Norwood of Pflugerville, Texas, who died during the assault on Fallujah.

“Ladies and gentlemen, with grateful hearts, we honor freedom’s defenders, and our military families, represented here this evening by Sergeant Norwood’s mom and dad, Janet and Bill Norwood,” President Bush said during his speech at the U.S. Capitol.