US, RUSSIAN & BRITISH RESCUERS HURRY TO THE SCENE AS THE STRANDED RUSSIAN SUB HAS ENOUGH OXYGEN TO LAST UNTIL MID-SATURDAY,
VIDEO HERE

MORE HERE ON THE SEVEN RUSSIAN SAILORS TRAPPED 600 FEET BENEATH THE SEA.

On August 12, 2000 an explosion occurred on the floor of the Barents Sea. 118 Russian men perished in this submarine disaster. 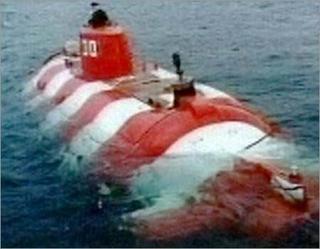 The US and Great Britain were called to assist with a Russian submarine caught on the ocean floor near eastern Russia:

A Russian ship managed to get a grip on the sub, which is caught on an underwater antenna, according to a Russian commander. The ship was trying to tug the vessel to a lesser depth where divers could free the sailors, whose oxygen supply was dwindling in the craft over 600 feet beneath the ocean’s surface.

The submarine is stranded near the Kamchatka Peninsula on the eastern Russian coast.

The rescue crews have only hours to help the submarine to safety:

According to Adm. Victor Federov, commander of Russia’s Pacific Fleet, the sailors had enough oxygen to last through Monday. Earlier, another Russian naval official said only 24 hours of oxygen remained.

The drama started Thursday when the propeller of the AS-28 mini-submarine became entangled in fishing nets or cable during a military exercise off the Kamchatka Peninsula on Russia’s east coast.

The mishap left the sub nearly 625 feet down on the Pacific floor in Beryozovaya Bay, 43 miles south of Petropavlovsk-Kamchatsky on the southern end of the peninsula. 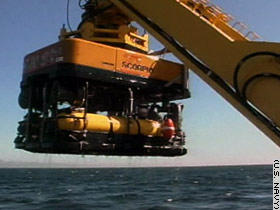 The US is sending a Navy crew and two robotic submersibles to help with the rescue. (CNN)

On August 12, 2000, an explosion on a Russian Kursk submarine left it stranded on the ocean floor. The officials did not believe there were any survivors but later a note was found written by one of the sailors after the blast:

A note that was found in the pocket of a seaman identified as Lt. Dmitry Kolesnikov: “All the crew from the sixth, seventh and eighth compartments went over to the ninth. There are 23 people here. We made this decision as a result of the accident. None of us can get to the surface…. I am writing blindly….” The chief of staff of the Northern Fleet, Vice Adm. Mikhail Motsak, said later that the note was written between 1:34 p.m. and 3:15 p.m. on Aug. 12, the day of the disaster. Foreign and Russian ships registered two powerful explosions in the area around 11:30 a.m.

Andrew at Siberian Light is following this story.

** Chap notes that “Ultraquiet No More”, a Group Blog of Submariners, is following the story closely. **

The Indepundit has a great roundup, too. 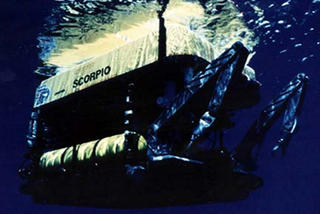 Two unmanned Scorpio submarines are on their way to Kamchatka.

Interfax is reporting that it is an anchor that is holding the submarine to the ocean floor:

The Russian mini-submarine that sank off the shores of the Kamchatka peninsula on Thursday is fitted with a coastal observation aerial, which is being held down to the seafloor by a 60-tonne anchor, and this is impeding the operation to raise the vessel, a top naval official said.

“The anchor needs to be blown up”.

“The bathyscaph’s crew are maintaining regular contact reporting the situation. According to the last report, the [crewmen’s] condition is satisfactory,” said deputy chief of staff of the Russian Navy Vladimir Pepelyayev.

Update: (Saturday 3AM) Both the British and the American submarine teams have landed in Russia.

Both the U.S. Navy and Britain’s military sent so-called Super Scorpios, and workers labored to deploy that vehicles as concerns rose over how much oxygen remained for the seven trapped men.

The Scorpios and their equipment will have to be loaded aboard a vessel and taken to the stricken mini-sub’s location.

For More Updates a new post has been started HERE.