The Leaders of the Commonwealth of Independent States met in Kazan, Tatarstan, this week. 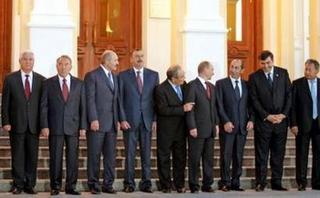 From left: Presidents Vladimir Voronin of Moldova, Nursultan Nazarbayev of Kazakhstan, Alexander Lukashenko of Belarus, Ilham Aliyev of Azerbaijan, Mintimer Shaymiev of Tatarstan, Vladimir Putin of Russia, Robert Kocharian of Armenia, Mikhail Saakashvili of Georgia and Kurmanbek Bakiyev of Kyrgyzstan pose after a summit of leaders of the Commonwealth of Independent States (CIS) in Kazan August 26, 2005. (Reuters)

When Putin came to power as prime-minister in 1999, Russia was the key player in the former Soviet republics and was the source of legitimacy for the regimes there.

These days, however, Moscow’s influence has waned considerably and Washington has become the main source of legitimacy.

“The countries that emerged by accident out of the rubble of the Soviet Union have evolved into full-fledged nations with their own new elites,” Belkovsky said. He added that the revolutions in countries such as Ukraine and Georgia happened because the Kremlin had “slept through” this nation-building process and not because the United States had conducted some underhand campaign.

The capital of Tatarstan, Kazan, celebrated its 1,000 year anniversary this week. 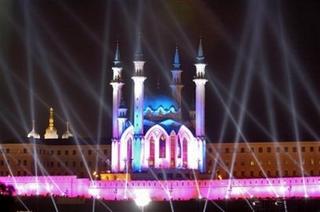 The Qol Sharif mosque is seen during an illumination rehearsal in Kazan, capital of Tatarstan, located about 700 km (450 miles) east of Moscow, Thursday night, Aug. 25, 2005. Leaders from 12 former Soviet republics meet here Friday amid deepening cracks in the alliance and growing efforts by some members to temper Russia’s influence in the region and increase ties with the West. (AP)

The CIS, which was formed as the Soviet Union collapsed in 1991, has long served as a means to discuss economic and political issues of the now-independent countries that were once ruled with an iron hand from Moscow.

Some of those states now seem reluctant to foster such close ties with Moscow.

Ukraine, Georgia, Kyrgyzstan and the small southern republic of Moldova have all elected more pro-reform governments in recent years, and some say they may soon set up their own regional organization to reflect the new reality.

Even Russian President Vladimir Putin seemed to acknowledge what this means for the CIS. In a final statement at the end of the summit, he said “the question of modernizing the CIS will be deep and very difficult.”

The leaders did sign agreements concerning the fight against terrorism and how to deal with illegal immigration. But, the emerging differences within the bloc are increasingly clear.

Ukraine, Georgia, and Kyrgyzstan have all been through political revolutions pushing them towards more Pro-Western democracies . This is quite a contrast to other CIS States where strongmen still hold a suffocating grip on their countries. For instance, Belarus, is described as the “Last European Dictatorship” by Secretary of State Rice and is listed as one of the “Six Outposts of Tyranny” by the United States.

Russia has felt very threatened by their loss of control and influence in the region. But it will be difficult for Putin’s Russia to change its ways. Moscow’s influence has waned considerably as of late and Washington has become the main source of legitimacy for the region. Russia’s belief that you can’t impose democracy from the outside is in contrast to current US foreign policy and most likely unpopular with those who would like to be able to choose for themselves.