The three Saudi democracy activists were convicted on May 15th of this year for leading a charge for a constitutional democracy. 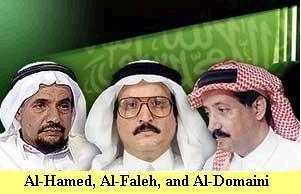 “Custodian of the Two Holy Mosques King Abdullah has issued an order to pardon and release the following prisoners: Abdullah Al-Hamid, Matrouk Al-Faleh, Ali Al-Damini and Saeed ibn Zaeer, who are serving jail sentences, as well as Abdul Rahman Al-Lahem, whose case is still in the court,” Interior Minister Prince Naif said, and praised the king’s kind gesture.

The news brought relief and tears of joy to their families.

Back in 2004 the three were having a hard time getting proper representation:

Then he was arrested.

Al-Lahem was not with the three this weekend, he was arrested back in November. He was not formally charged until January for criticizing government officials, working against the government, and violating a written pledge not to speak to the international press. Last word is that he sits in solitary confinement. So the trial of the three has proceeded without him.

The activists were convicted and sentenced from six to nine years in prison:

A Saudi court jailed three prominent reformists on Sunday for up to nine years for trying to sow dissent and challenge the royal family, dealing a blow to tentative reforms in the absolute monarchy.

Judges at the Riyadh court, which was ringed by security forces, issued their verdict after a nine-month trial held mainly behind closed doors despite earlier promises of openness.

The court sentenced academics Ali al-Dumaini to nine years in jail, Abdullah al-Hamed to seven years and Matruk al-Faleh to six years, lawyers said. All three were arrested in March 2004 after petitioning the kingdom’s rulers to move toward a constitutional monarchy and speed up political reforms.

Fahad Nazer, Fellow at The Institute for Gulf Affairs, takes this as just a small step on a long road towards democracy:

“While this release is long overdue, it is only a first step in what is surely a long road to Saudi democracy. This can be an auspicious start to the reign of the new king if it ushers in a genuine new age of freedom of expression and political liberalization.”

But John, the Saudi expert at Crossroads Arabia, is more upbeat:

We need to watch closely what happens next. I anticipate action on women’s rights, whether in a flat declaration that they will take part in the next municipal elections, that they be appointed to the Shoura Council, or that new doors be opened to them in employment. Their driving is still too divisive an issue, I think, because it has become so public.

This is wonderful news. Let us hope it continues!