The people are waiting for new rounds of violence. 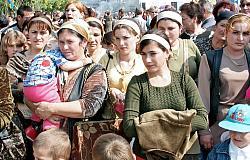 Villagers rallied on Friday to demand that Chechens be expelled from the village of Yandyki. (Moscow Times)

More than 1,000 police officers and troops patrolled a village in the Astrakhan region on Friday to maintain calm after seven people were injured and nine homes were set ablaze in violent ethnic clashes.

Tempers flared after a young Kalmyk was shot and killed in a clash between several Chechens and Kalmyks in a bar in Yandyki on Tuesday night, Interfax reported, citing Astrakhan police.

The tensions in Yandyki are escalating:

Both Kalmyks and Chechens are coming together in the town from areas throughout the southern region, while police, special forces and interior troops have gathered to try to prevent further conflict. And while law enforcement is saying that they have the situation under control, everyone is bracing for a new, more lethal outburst of violence.

On Friday, the Astrakhan region settlement of Yandyki, the site of massive unrest on Thursday, was surrounded by the military and special forces. Roads into the area have been blocked off by military servicemen and interior troops. An group of investigators is working in the area trying to determine what caused the massive street fight between Kalmyks and Chechens. Also on Friday, deputy Prosecutor General Nikolai Shepel arrived on site to take matters under his personal control.

Update on Kalmykia: Here is some useful information I found while I was out snooping around at Siberian Light.

Venichka says…
“Kalmykiya isn’t only the sole Buddhist territory in Europe, it has the only desert in Europe (which is expanding fast, according to some reports at least).”

“The Kalmyks are indeed Buddhists. They practice Tibetan Buddhism and they revere the Dalai Lama as a holy figure. They are also a Mongol people related to the Buriats. After WWII the US Congress had to pass special legislation to classify them as European to allow some refugees to settle in NJ and PA.They have some big Buddhist temples there. They also had a presence in Yugoslavia after the Bolshevik Revolution.”