IRANIANS HIT THE STREETS TO PROTEST THE WEST AND THE IAEA AFTER FRIDAY PRAYERS,
VIDEO HERE

Just what are they saying at Friday prayers that gets these guys so fired up? 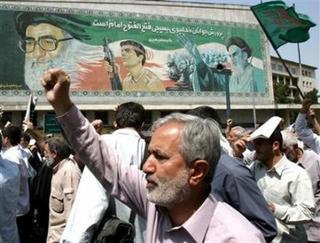 Now Iran is pushing ahead on another nuclear track:

As the U.S. and Europe struggle to stop Iran’s uranium development, the Iranians are pushing ahead on another track that could also lead to a nuclear bomb — construction of a heavy-water reactor that can produce weapons-grade plutonium.

It will take at least another four years for Iran to complete the reactor, making it a less immediate worry for the West than the uranium program, parts of which are either in operation or ready to go at a moment’s notice.

But ultimately, the heavy-water reactor could prove more dangerous, since bombs made with plutonium are smaller and easier to fit onto a ballistic missile.

In a comprehensive package aimed at reining in Iran’s nuclear program, Europe proposed that it give up the heavy-water project in return for a light-water reactor, seen by arms control experts as easier to monitor to ensure it’s not being used for weapons.

Iran — which says its nuclear program is peaceful — rejected the entire package this week. The head of Iran’s Atomic Energy Organization called the heavy-water reactor offer a “joke.”