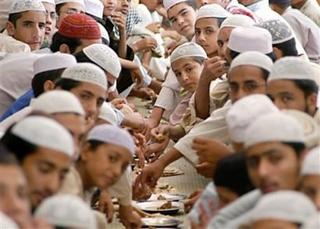 Pakistani religious students enjoy lunch at their religious school Jamia Islamia, Tuesday, Aug. 9, 2005 in Karachi, Pakistan. Religious leaders from an alliance of opposition religious parties in Pakistan warned a nationwide protests over a government crackdown against Islamic schools and a decision to expel their foreign students after London bombings. (AP)

Two Nepalese nationals will be leaving for their country as a part of a government drive to curb extremism.

Muhammad Ali (21) and Shabnam Shagufta (19), both students of Jamia Naeemia madrassa in Lahore, crossed over to India at the Wagah border post enroute Nepal after being warned by Pakistan officials that they could be arrested unless they leave the country by September, Geo TV reported.

The two Nepali nationals were the first foreign students to leave Pakistan since President Pervez Musharraf’s July 29 announcement that some 1,400 foreign pupils at madrassas must leave the country.