Here is more on the “Other America”… 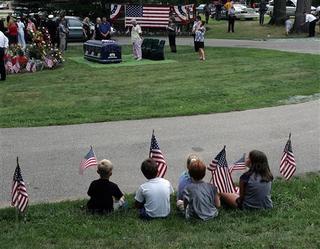 Here is another beautiful story about how Americans came together this week to honor their fallen Marines from Iraq. It makes you wonder how much things would be different if the Mainstream Media would carry these stories and emphasize them rather than the Sheehan family and friends story on their front pages.

This story comes from the Heartland,… Willoughby, Ohio, as published at Cleveland.com. The pictures are from the funeral of fellow Marine Nathan Deyarmin Jr.

Some 600 mourners overflowed Mentor United Methodist Church Wednesday to honor the service, the sacrifice, and the memory of Lance Cpl. Brian Montgomery on Wednesday August 10th.

“Thank you, Brian, for getting me home,” he said, lifting his eyes. “That is all that mattered to him was that I make it home. He told me: If I fall, make sure my boy gets my dog tags.’ ”

Eric Montgomery led the mourners in a two-minute standing ovation for his brother.

“I know my son is now in heaven — because he died in hell,” Paul Montgomery said.

Montgomery said his son had always been a peacemaker.

Brian Montgomery’s wife, Pam, said family and friends can keep her late husband’s memory alive by honoring others still fighting. “We need to honor our service members every day,” she said. “If you see one, salute them. Or stop in the recruiting office, or the VFW, and thank them.” 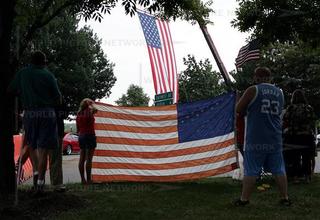 People line the streets in Tallmadge, OH. for the funeral of fallen Marine, Daniel Nathan Deyarmin Jr. this week. His mother said that once he cried about having to kill people. But he was also proud of trying to make the country safe.

Dan Kozar was stoic and proud. His son Daniel is a 30-year-old staff sergeant in the 25th Regiment.

“I don’t think there’s anything more honorable than to serve your country like these young men are doing,” Kozar said.

Elsewhere, 80 players of the South High football team stopped their summer workout to stand silent as the procession drove along Robinhood Drive.

Renee Finucan of Mentor juggled a giant American flag and a 1-year-old boy of her own.

Her three other young sons darted around her outside the church.

“We came because you never know when it could be you,” she said, choking back tears. “Someday that could be my boy.”

Both Daniel Nathan Deyarmin Jr. and Lance Cpl. Brian Montgomery were buried this week in Ohio. Their families buried their heroes this week.

I posted on Texas Honors A Hero earlier this week.