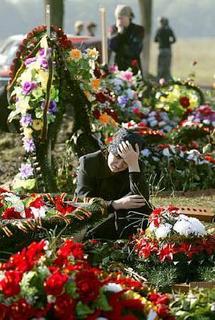 The new Beslan School built after the old one was destroyed in last year’s terrorist attack has been ransacked of its equipment:

Thieves ransacked classrooms and made off with TVs, computers and printers worth about $6,200, officials say.

The new equipment had been bought as part of preparations for the new school term, which is due to begin next month.

More than 330 people, most of them children, were killed in the three-day siege by pro-Chechen gunmen who were assaulted by Russian troops.

The theft took place just three weeks before the first anniversary of the massacre, which began as children, students and parents gathered on 1 September 2004 to mark the first day of term. 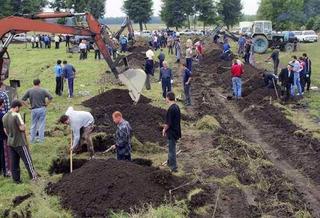 At left, the men dig graves for school children in Beslan last September.

Also, this last week comes some startling news from one of the hostages:

“I was sitting near a militant, whose nick-name was Ali. He told me: “We spent a long time in preparation in order to arrive here. I have even shaved off my beard in order to come here. All of you will die,” victim Atikat Koniyeva said, giving evidence during a trial in the North Ossetia Supreme Court.

“I made these bombs myself. There are 1,200 metal objects inside each of them. One will be enough for all of you,” Koniyeva quoted the militant as saying.

On August 2nd of this month, nearly a year after the September 1st attacks, the 331st victim of the Beslan Massacre passed away from injuries acquired during the siege:

Marina Zhukayeva died at her home Monday, the RIA-Novosti and Interfax news agencies reported, quoting Mairbek Tuayev, the leader of a citizens group in Beslan. He said coroners determined that Zhukayeva, who was in her early 30s, died of injuries sustained during the hostage crisis.

Tuayev did not specify what injuries the woman had suffered, but said she had been on life support since shortly after the Sept. 1-3 attack, which ended in a maelstrom of explosions and gunfire. Officials had said 330 hostages died, more than half of them children.

But there is some good news…
Trey Jackson has a post up about a Middle Eastern Muslim Politician who is speaking out against terrorism.