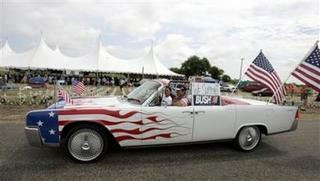 St. Louisan, Adam Smith, just returned from Crawford with this to say:

“I don’t have much to add that has not been said.
I just got back home from my trip to Crawford. It was very uplifting. For
miles there are signs in the road reading IM4W and This Is Bush Country.
They are like campaign signs. Why don’t people pull them out? The support
for the President is tremendous in Crawford. Pictures do no justice, these
signs literally go on for miles.”

“The MAF rally was a huge success.” The best place for details is at

“The best I can say to sum this up is that President Bush, Our War Effort,
and Our Troops have plenty of support. If the anti war left and the MSM
think they can create another Vietnam they could not be more wrong. The
“silent majority” that Nixon referred to in 1969 have found their voice.”

But, Al Sharpton makes it “0 for 2” for black democrats this weekend. 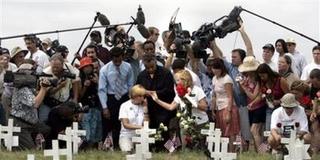 A manufactured photo-op for Cindy Sheehan, left, Rev. Al Sharpton, center, and Evan Bright as they lay roses at the crosses at the camp near President Bush’s ranch in Crawford, Texas, Sunday, Aug. 28, 2005. (AP)

The hard left sent in the troops to Crawford this weekend in a sign that this protest against President Bush is far from over. The camera crews were there to make sure that America did not miss Cindy and Al in embrace:

“I feel that it is our moral obligation to stand and to be courageous with these families, and particularly Cindy, that have become the conscience of this nation,” said Sharpton, an activist and former Democratic presidential candidate.

Sharpton and Sheehan laid roses at crosses near “Camp Casey,” named for Sheehan’s 24-year-old son who was killed in Iraq last year.

Actor Martin Sheen, who portrays the Democratic president on NBC’s “The West Wing,” also met with Sheehan on Sunday.