But, some Americans aren’t buying it! 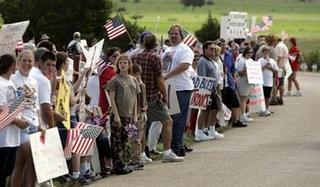 These Bush supporters line the road across from the “Peace Protesters” outside of Crawford, Texas. Let’s see if these 50+ protesters get the same press as the 50+ Anti-War protesters have gotten… 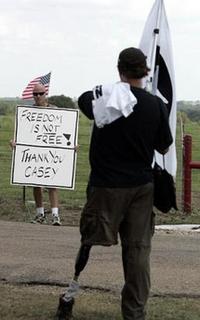 James Seaberry, left, of Garland, Texas, stands across the road from Tim Oringer, of Santa Fe, N.M., on the road to President Bush’s ranch near Crawford, Texas, Saturday, Aug. 13, 2005. Seaberry came out to counter protest the camp of Cindy Sheehan. (AP)

A farmer down in Crawford went out for some target practice outside his farmhouse that is located near Camp Moonbat in Crawford, Texas. It is not clear what he saw flying overhead, but there was no mistaking the sites on the ground.

The “200” protesters and media personnel started into their second week of assault on the President, The Iraq War and the military. Truly, this may possibly be the most covered protest ever for its size! 50-200 protesters have been camping in this muddy area outside the Bush Ranch near Crawford. The protest has been led by the contradictory and grieving camper, Cindy Sheehan. Sheehan made clear her sentiment towards Israel this week as well. President Bush said that he will not meet with Cindy… again. He met with her previously after the death of her son who enlisted with the military and died a hero in the Iraq War.

This Crawford Protest is shaping up to be the most covered smallest protest in modern history. 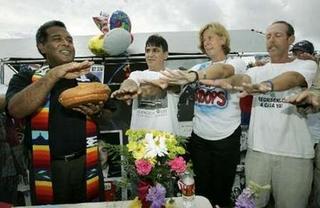 So, is Father Barrios from New York blessing a Subway Footlong Turkey Club in this shot? And what are the other protesters doing? This is one rare ritual I have never seen at Catholic Service I’ve attended. (AFP)

The media is quick to confirm that their constant coverage of this small protest group is doing its damage on the country’s psyche. The media sounds a bit self-congratulatory as it slams the president, military, and Iraq War effort, with new poll results at the end of this AFP report:

Larry Mattlage, who lives next to the Bush ranch where the president is spending a five week vacation, complained about the 200 protestors, media and government security officials occupying the road outside his own residence after firing a rifle into the air several times.

“Five weeks of this is too much. We live here, this is our community,” Mattlage said in footage show by CNN television, while insisting the gunshots were just him “getting ready for dove season.”

Asked if the gunshots had another message, Mattlage told reporters: “Figure it out for yourself.”

An anti-war protest outside Bush’s Prairie Chapel ranch, launched a week ago by Cindy Sheehan, the mother of a soldier killed in Iraq, has garnered heavy media attention as public opinion polls show a sharp decline in support for the Iraq war.

Here are two other protests you did not hear about through the mainstream media:
Texas Honors a Hero
Ohio Honors Their Heroes