This will be interesting! The UN, African Union and the US have condemned the military coup that took over Mauritania, yesterday. 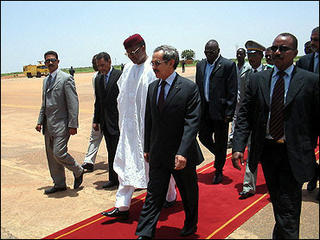 President Taya made this visit to Niger yesterday. He was overthrown at home while he was away at King Fahd’s funeral.

But, there were street celebrations after the news broke that the 20 year rule of President Maaouya Ould Sid’Ahmed Taya had ended:

The AU said it strongly condemned any seizure of power, while the US called for a peaceful return to order under President Maaouiya Ould Sid Ahmed Taya.

The Mauritanian army said on Wednesday that it had ended the “totalitarian regime” of President Taya.

It said it had set up a governing council to rule the West African state for two years, after which it would organise free and fair elections.

There were street celebrations in the capital, Nouakchott, following the announcement on national radio.