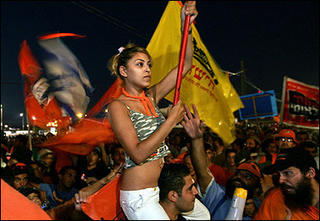 Israelis gathered in the thousands to protest the imminent implementation of Prime Minister Sharon’s Gaza pullout plan in the southern Israeli town of Sderot, today. (AFP)

Israelis gathered today in protest to stop the pullout plan from Gaza:

Thousands of settlers and their supporters were gathering in southern Israel for a giant rally in a last-ditch protest against the imminent pullout from the Gaza Strip.

Despite the show of mass opposition Tuesday, Prime Minister Ariel Sharon’s office confirmed that the cabinet would vote in five days to give final approval to the evacuation of a first group of doomed settlements.

Police raised their state of alert to its peace-time maximum, with officers and soldiers deployed in massive numbers to block an attempt by settlers and their supporters to march towards the doomed settlements.

Under an overnight compromise deal thrashed out by police and leaders of the main Yesha settlers lobby, the rally will be restricted to the town of Sderot and not force its way into the Gaza settlements, a declared military zone.

The rally is intended as part of final efforts to force Prime Minister Ariel Sharon to rethink his plan to remove settlers from Palestinian territory for the first time since the Gaza Strip and West Bank were occupied in 1967.