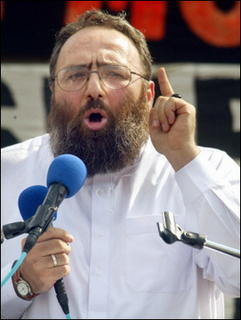 Emergency measures are being drawn up to prevent the extremist cleric Sheikh Omar Bakri Mohammed returning.

Mr Bakri provoked outrage last week by saying he would not inform police if he knew Muslim extremists were planning a bomb attack in Britain. He left for Beirut at the weekend amid suggestions that he could be tried for treason but the Government has since made clear there is no prospect of that.

Charles Clarke, the Home Secretary, is considering using special powers to exclude the leader of al-Muhajiroun from re-entering Britain in the next few days. Mr Clarke could decide that following the cleric’s comments, which include reportedly describing the July 7 suicide bombers as “the fantastic four”, that his presence in this country was not for the public good.

The Syrian-born cleric, 46, is at the centre of a political row, after John Prescott, the Deputy Prime Minister, said that the Government had no powers to deal with the extremist and he was able to come and go from Britain when he wanted.

Further resentment has been caused with the disclosure that Mr Bakri, who has a wife and seven children living in the UK, is due to have a heart operation on the NHS in the next few months.

The Sheik changes his sermons depending on the audience:

On television and in press interviews Sheikh Bakri Mohammed, 47, has claimed recently that he has restrained young British Muslims from mounting terrorist attacks in the UK.

But on the internet and at private meetings in parks and homes he has advocated terrorism, praised the 9/11 hijackers as the “Magnificent 19” and told his followers that Britain was a “land of war”.

Last weekend a Sunday Times undercover reporter who infiltrated his Saviour Sect group said that Sheikh Bakri Mohammed had described the 7/7 suicide bombers as “the fantastic four”. It was exactly the kind of outrageous and offensive remark that has characterised his 19-year career on the Islamist fringe.

Update: (Thursday AM) The UK arrested 10 Muslim extremists today. The Jordanian cleric Abu Qatada, who is subject to a control order, is among them, the BBC has learned.

Home Secretary Charles Clarke confirmed 10 people would be detained pending deportation but he did not name them.

Update 2: (Thursday AM) Lebanon has detained Sheik Bakri this morning! Officials detained him after he left a news studio! When are these clowns going to be ignored by the media and not propped up?… as if they are doing anything more than just inciting terrorism.