** This same liberal group sponsored “The Jury Of Conscience World Tribunal on Iraq” where the US was accused of using napalm in the War in Iraq! ** 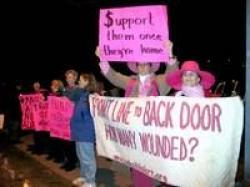 Picture of a Code Pink Rally at Walter Reed Hospital earlier this year. The Code Pink members were protesting the night arrivals to the hospital.

Code Pink, one of the support groups of Cindy Sheehan, is at the forefront of these attacks on injured U.S. soldiers:

The Walter Reed Army Medical Center in Washington, D.C., the current home of hundreds of wounded veterans from the war in Iraq, has been the target of weekly anti-war demonstrations since March. The protesters hold signs that read “Maimed for Lies” and “Enlist here and die for Halliburton.”

The anti-war demonstrators, who obtain their protest permits from the Washington, D.C., police department, position themselves directly in front of the main entrance to the Army Medical Center, which is located in northwest D.C., about five miles from the White House.

Among the props used by the protesters are mock caskets, lined up on the sidewalk to represent the death toll in Iraq.

Code Pink Women for Peace, one of the groups backing anti-war activist Cindy Sheehan’s vigil outside President Bush’s ranch in Crawford Texas, organizes the protests at Walter Reed as well. 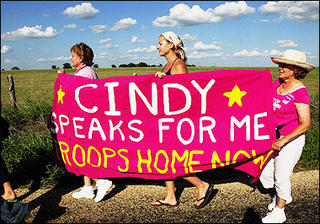 Code Pink has been at Cindy Sheehan’s side since her vigil in Crawford began. 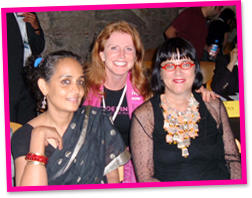 Founder Jodie Evans (above center) attended the extreme leftist conference “The Jury Of Conscience World Tribunal On Iraq – Istanbul 23rd -27th June 2005”. Code Pink was a sponsor of this tribunal where they called Iraq “the most cowardly war in history.” The attendees of this conference accused the US of using napalm in the Iraq War:

Every aspect of the war will be examined–its legality, the role of international institutions and major corporations in the occupation, the role of the media, the impact of weapons such as depleted uranium munitions, napalm, and cluster bombs, the use of and legitimation of torture, the ecological impacts of the war, the responsibility of Arab governments, the impact of Iraq’s occupation on Palestine, and the history of US and British military interventions in Iraq.

Founder Medea Benjamin is also the founder of Global Exchange an organization that openly supports President Hugo Chavez of Venezuela. 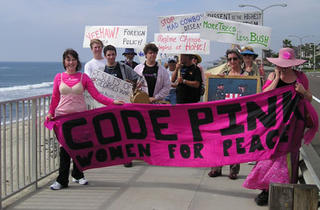