The death of Sheik Khaznawi may be the rallying cry for Kurds in Syria. 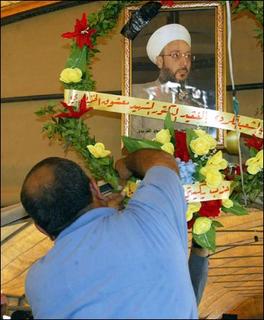 A Syrian Kurd decorates a shrine to Kurdish Leader Sheik Khaznawi who was found dead 20 days after he `disappeared.’ (AFP)

Syrian police have arrested about 35 Syrian Kurds in a northern town near Aleppo after they assaulted policemen dispersing members of a banned separatist faction.

Syria arrested 35 people after a riot in the eastern city of Ain al-Arab on Monday:

Ammar Qurabi of the Arab Organisation of Human Rights in Syria (AOHRS) said a crowd rioted on Monday after police prevented them from holding a celebration to mark the 25th anniversary of the Kurdistan Workers Party (PKK).

“About 35 people were arrested after hurling stones at the police and damaging property and vehicles in Ain al-Arab,” Qurabi told reporters on Tuesday. “The police did not use firearms, but they used tear gas after the violence started.”

Qurabi said the violence subsided after the arrests. “AOHRS condemns the use of violence by any entity … emphasises the importance of national unity and urges self restraint,” his rights group said in a statement.

In June, Syria sentenced three members of the PKK to jail after convicting them of seeking secession.

Details are emerging about the brutal death of Kurdish Leader Sheik Khaznawi:

A few days later, state security agents took the sons to see the cleric. His thick beard, a badge of his religious devotion, had been hacked off. His body bore marks of torture – broken teeth, badly burned skin. The cleric was dead.

The security agents told the sons that criminals had confessed to killing Sheik Mohammed Mashuq Khaznawi and burying him in a shallow grave. But his family didn’t believe them.

In early June, the sons brought his body home to Qamishli and laid the remains to rest wrapped in the Kurdish flag, a defiant symbol of a people without a country. Since then, Khaznawi’s torture and death has become a rallying cry for a restive Kurdish people.

The death of the mild-mannered sheik robbed Syria’s Kurds of a charismatic, grass-roots champion for their demand for equal rights in the predominantly Arab country.

But with many Syrian Arabs fearing that the Kurds would cleave Syrian and found a Kurdish homeland, the government saw Khaznawi as the figurehead of a volatile separatist threat.

Several thousand Kurds had demonstrated in June in Qamishli demanding to “know the truth” about the killing of Kurdish cleric Mohammed Maashuq Khaznawi, Kurdish officials said.

…Or Does it Explode blog is also reporting that the Syrian Information Ministry has identified 63 intellectuals targeted for their writings critical of the Assad regime’s abuses. The Assad regime has even gone so far as to protest to Lebanon’s new prime minister that these Syrian intellectuals be banned from writing in Lebanese newspapers.