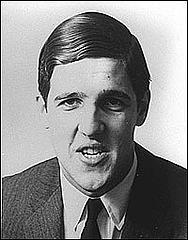 John F. Kerry spoke to the National Conference of State Legislatures in Washington State this weekend. (via Blogs for Bush). I am wondering if anyone else caught this?…

“We have to go out and fight for the real issues that make a difference in the lives of the American people and we don’t need some “great lurch” to the right or “lurch” to the left or redefinition of the Democratic Party,” the Massachusetts Democrat said. “The last thing America needs is a second Republican Party.”

Throwing one “lurch” let alone two “lurches” in his talk was not the best choice of positive imaging, that’s for sure. That’s like GW talking about “chimps” in one of his own speeches. It just distracts from the main argument!

His points don’t help the cause much either, as Instapundit and Jayson at Polipundit noted. I don’t think there are many locales where the left can win with their atheist, pro-partial birth abortion, high taxing, big government, soft on defense, platform. But, I sure would like to see them try it for a few election cycles!