“Twenty-two years is enough to live,” says the member of the radical Palestinian group Islamic Jihad, his brown eyes darting out from behind the mask. 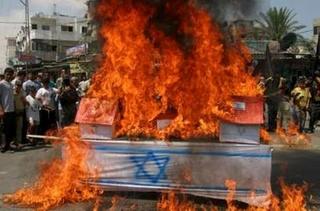 Palestinian members of the Islamic Jihad movement burn a model of an Israeli settlement while celebrating the Israeli pullout of Jewish settlements from Gaza, at the Rafah refugee camp, southern Gaza Strip, August 22, 2005. (Reuters)

First Hamas said that it would continue its terrorist operations, now Palestinian Islamic Jihad has come out with its own similar message of its intent to continue operations.

While Hamas expects to sweep January legislative elections in Gaza, its smaller rival Islamic Jihad could prove to be the spoiler of the reigning peace.

“We lived in what they called peace. But we got nothing from that peace. Only this five-year intifada was enough for the enemy to leave Gaza,” Abu Hamza says of the uprising against Israeli occupation unleashed in September 2000.

Despite avowals of their wish for unity, co-existence does not seem tenable between Islamic Jihad, which styles itself as a military elite, and Abbas’s Palestinian Authority. The two have a history fraught with tensions and periodic violence. 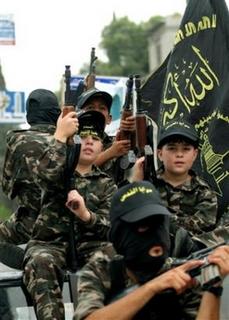 But once Israel’s historic pullout is finished, the Palestinian Authority and Islamic Jihad could be locked on a path that may lead to just such a scenario.

Islamic Jihad, which was the last group to launch a major attack on Israel ahead of the pullout, with a July suicide bombing in the coastal town of Netanya, says it will pursue attacks against Israel unless the authorities can stop them.

“The security forces will not give the resistance the chance to strike Israel, but we will do what’s right for the nation… If the Palestinian Authority’s intelligence has any knowledge of our attacks, it is clear they will stop us, but they will not be able to stop all the attacks.” 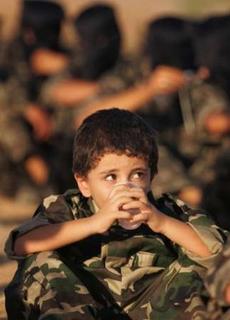 A young Palestinian boy takes a break with a glass of water as he watches members of the Islamic Jihad during a training exercise at the Rafah refugee camp, southern Gaza Strip August 21, 2005. (Reuters)