Americans are already asking, “Is this just Another Rovian Conspiracy?”

In a rally supporting Lynne Stewart, convicted of aiding terrorists, Cindy Sheehan had this to say:

– “America has been killing people, like my sister over here said, since we first stepped on this continent.”

– “We have been responsible for death and destruction.”

– “It’s OK for Israel to occupy Palestine, yeah,… and it’s OK for Iraq no, for America to occupy Iraq, but it’s not OK for Syria to be in Lebanon. They’re a bunch of f**king hypocrites!”

Is Karl Rove the architect behind the Sheehan lunacy? 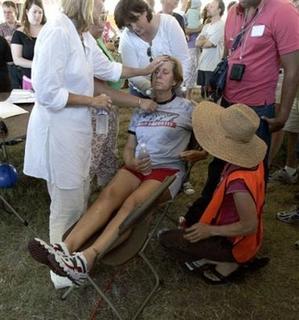 Cindy Sheehan is comforted when she felt faint after seeing a portrait of her son Casey Sheehan at Camp Casey. (AP)

Cindy is back at Camp Casey where she said a part of her remained when she left to attend to her mother last week. Cindy claims that “This is where I belong, until Aug. 31, like I told the president,” Sheehan said at the Waco airport before driving about 20 miles to the Crawford site.

But, Americans are beginning to wonder if this is just another brilliant move by Karl Rove? Cindy Sheehan is a bit like the Democratic Presidential Candidate’s wife from the last election. The more you see and hear her, the more you start to wonder. You see that this is more than just a “grieving mother”.

The longer Cindy stays in Crawford the more Americans will see the real Cindy and not the one the Liberal media has been trying to invent. This can’t be good for Anti-War Leftists and the Democratic Party in general. The longer the cameras are focused on Camp Casey the more Americans will see that each new little white cross that the Anti-War Liberals pound into the ground is cause for celebration to these anti-military folk and a notch on their Anti-War tool belt.

It won’t take long for Americans to see that these liberals pounding on crosses are the same people that run military recruiters out of schools, refuse old battleships in their ports, and besiege wounded and disabled soldiers at Walter Reed Hospital.

And, just to not lose the perspective on the successful military campaign we are currently operating…

John at Powerline has a telling statistic from yesterday that received loads of attention:

Some Thoughts on Casualties in Times of War and Peace

…We are conducting an experiment never before seen, as far as I know, in the history of the human race. We are trying to fight a war under the auspices of an establishment that is determined–to put the most charitable face on it–to emphasize American casualties over all other information about the war.

Sometimes it becomes necessary to state the obvious: being a soldier is a dangerous thing. This is why we honor our service members’ courage. For a soldier, sailor or Marine, “courage” isn’t an easily-abused abstraction–“it took a lot of courage to vote against the farm bill”–it’s a requirement of the job.

Even in peacetime. The media’s breathless tabulation of casualties in Iraq–now, over 1,800 deaths–is generally devoid of context. Here’s some context: between 1983 and 1996, 18,006 American military personnel died accidentally in the service of their country. That death rate of 1,286 per year exceeds the rate of combat deaths in Iraq by a ratio of nearly two to one…

If those liberals would have been around for previous American Wars, they would still be pounding in those little crosses and running out of gravel road down in Crawford.

As far as war casulaties go, and as regrettable as they are, this has been a brilliant military campaign that the liberal media refuses to recognize. Here is just one comparative statistic on…

So as Karl Rove continues to work his magic through Cindy Sheehan, let’s hope the rest of the country will keep focused and supportive of the men and women in uniform who are running a brilliant military campaign in Iraq.