The Government in Iran today says it will move ahead with nuclear fuel work. 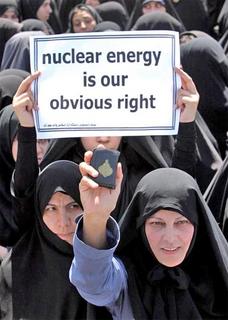 Iran’s nuclear chief says that Iran will press on for nuclear fuel work:

Larijani signaled in his first interview since being named Monday as Supreme National Security Council head that Iran would not roll back its August 8 resumption of uranium conversion but that he wanted to continue talks with the European Union.

“Iran does not accept the resolution” which the International Atomic Energy Organisation (IAEA) passed last week urging Tehran to suspend all such activities, he told the Shargh newspaper.

The Europeans “must understand that the Iranian government is determined to preserve the nuclear fuel production cycle”, said Larijani, who took over from pragmatist Hassan Rowhani.

“We insist on Natanz,” the site of Iran’s uranium enrichment factory, “but this must go through the channel of negotiations,” he said.

He acknowledged it was “theoretically possible” that the Islamic republic could be referred to the UN Security Council for possible sanctions over its controversial nuclear activities.

Students form a human chain in protest around the nuclear facility in Isfahan today.

The new chief, Ali Larijani , is noted as a hardliner in Iran:

Larijani, one of eight candidates in the first round of Iran’s presidential election in June, is a trusted aide of supreme leader Ayatollah Ali Khamenei.

He is on the record as a staunch critic of troubled talks with the European Union on providing reassurances that Iran’s nuclear programme is exclusively civil. 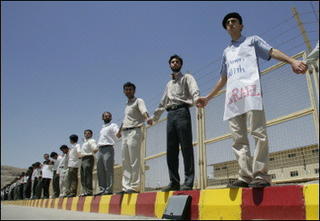 More human chain around the nuclear facility in Isfahan.

Al Bawaba is claiming that the new chief wants negotiations to continue:

“Iran deems it a principle to continue talks and it accepts negotiation as the right manner,” Ali Larijani, the new general secretary of Iran’s Supreme National Security Council, was quoted as saying on Tuesday by Sharq daily.

Earlier, Western diplomats have expressed concern that Larijani, a close aide to Supreme Leader Ayatollah Ali Khamenei, will adopt a tougher line on the nuclear issue than his predecessor Hassan Rohani.