Indonesia Protests Against US & Europe

I find it troubling that there would be a protest like this. Especially since it was the West that DONATED BILLIONS in aid to this region after the horrible tsunami disaster in December. 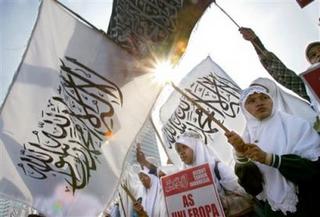 Indonesian Muslim women wave flags with Arabic writings say ‘There’s no God but Allah and I believe that Muhammad is His messenger’, during a protest in Jakarta on Sunday. (AP) 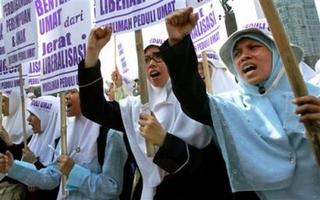 Indonesian protesters raise their fists as they shout ‘Allahuakbar!’ (God is great) during a protest in Jakarta, Sunday, Aug. 14, 2005. Hundreds of Muslims staged the rally rejecting the presence of non-Muslim countries, especially the United States and European Union, in the troubled province of Aceh to participate in the monitoring of the peace accord between the government and the separatist rebels which will be signed in Finland on Monday. (AP)