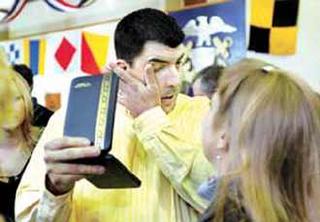 Illinois paid tribute to a fallen marine one year after his death from News Channel 5, KSDK in St. Louis:

Marine Lance Corporal Christopher Belchik was killed in Iraq a year ago as he worked to save members of his unit. Thursday, the Godfrey, Illinois native was honored with a living memorial.

It’s said once a Marine, always a Marine. And Marines were on hand to pay tribute to one of their own. Illinois Lt. Gov. Pat Quinn said, “That’s Chris Belchik, a hero proved in liberating strife.”

The lieutenant governor told Belchik’s widow that God didn’t give Chris a long life, but a life lived well. Belchik was weeks from coming home when he was killed last August 22nd.

Thursday, his community planted an evergreen near the Veterans Memorial in Alton’s Gordon Moore Park to memorialize him.

He gave his life while saving his brother marines:

“With his platoon attacked from the rear by an enemy fire team attempting to ambush his patrol, his violent response halted the enemy attack, driving them away… Corporal Belchik gallantly gave his life for his country.”

Christopher Belchik, 30, a native of the Alton-Godfrey area, was killed in Iraq’s Anbar province on Aug. 22 by a mortar round. Earlier that day, he had saved the lives of Marines in his squad when he discovered mines planted near their position, according to the citation.

Cpl. Christopher Belchik, a native of the Alton-Godfrey area, was killed in Iraq’s Anbar province in August 2004, the Defense Department has confirmed. Brian Belchik said he had been told that a mortar round killed his brother and injured several other Marines. (Post Dispatch)

A blue spruce was dedicated to Chris near the Veteran’s Memorial in Belleville, Illinois:

After the service, relatives gathered around the 5-foot tree near the park’s war memorial to reflect on a life that was. No one stared harder into the tree’s limbs than Belchik’s mother, Lynn Lenker.

Holding on to her golden necklaces charm with a picture of Chris etched into it, Lenker held back tears as she described the hurt she feels each day without her son.

“I just want Chris to always be remembered,” she said. “He gave his life for us, so for some one to give him anything shows that there are people who care.”

His wife shared these words after his medal ceremony:

“Talking about the day he died, that’s what got me,” Mary Belchik, who lives in Alton, said after the ceremony ended. “There are a couple guys running around Camp Lejeune that are alive today because of what he did.”

But if the 1992 Alton High School graduate were at the ceremony Tuesday, he simply would have said that he was only doing his job, proud family members said.

“If he was here, he’d want to know what all this fuss was about,” Mary Belchik said. “He’s always been a person who goes above and beyond.”

His father, Stephen Belchik of Staunton, flies a Marine Corps flag beneath an American flag on a pole in front of his home. In the living room, a picture of Christopher in his dress uniform occupies a position of honor on a lamp table. (PD)