Update: HERE IS THE VIDEO OF HUNTER S. THOMPSON FIREWORKS FROM SATURDAY NIGHT

The ashes of Hunter S. Thompson will be shot off tonight from this tower. 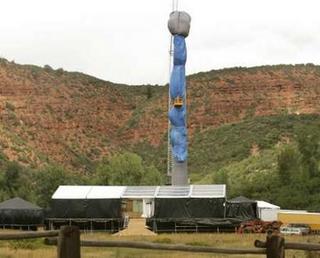 A 150-foot tall tower shrouded with tarps stands on the Hunter S. Thompson Owl Farm property in Woody Creek, Colorado August 19, 2005. Gonzo journalist Hunter S. Thompson’s cremated ashes will be exploded in fireworks from the top of the tower in a ceremonytonight, August 20, 2005.

The excitement is building for the fireworks display tonight:

Firework shells carrying the sealed ashes of “gonzo” journalist Hunter S. Thompson arrived in an armored truck at his mountain home as final preparations were being made for his star-studded farewell.

The shells were scheduled to be launched Saturday night from a 150-foot-tall monument erected behind Thompson’s house in Woody Creek, just outside Aspen. The event will be private, open to about 250 invited guests including Thompson’s longtime illustrator, Ralph Steadman, and actors Sean Penn and Johnny Depp.

“We haven’t noticed a lot of curiosity seekers or pilgrims, but the buzz and the excitement is increasing every hour,” family spokesman Matt Moseley said Friday. “People are coming into town, people invited to the event, and I’ve been getting calls from fans who’ll say things like ’I’m coming in from Wisconsin with a case of Chivas.”’

Many celebrities are planning on attending the fireworks display:

Anita Thompson (Hunter’s widow) said the gathering Saturday will include some reminiscence, readings from Thompson’s work and performances by Lyle Lovett and the Nitty Gritty Dirt Band. About 250 people were invited, including Thompson’s longtime illustrator, Ralph Steadman, and actors Sean Penn and Johnny Depp, close friends of the writer.

Depp, who portrayed Thompson in the 1998 movie version of “Fear and Loathing in Las Vegas,” is financing much of the send-off, Anita Thompson said. She said she does not know the total cost and said others have offered to chip in.

Hat Tip to Lon N. who gave me the story over pecan waffles this morning!