Not if Young Ethiopian Diaspora can help it!

The soap opera that is the Ethiopian elections continues to unfold like a cheap, tawdry novel, and here’s a brief update. Diaspora says, “All we are missing is a long-lost evil twin, but give it time…” 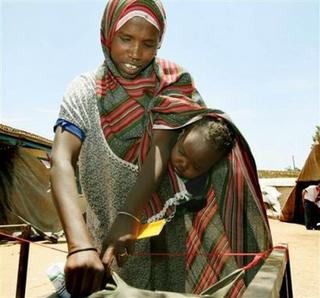 A Ethiopian woman holding her child casts her vote outside of a polling station in the Somali region’s capital city of Jijiga, Ethiopia, on Sunday, Aug 21, 2005. 1.5 million electors are due to vote Sunday in this remote area, where the controversed voting process had to be postponed due to poor infrastructure and nomadic people’s lifestyle. (AP Photo/Boris Heger)

We’ve been waiting to see how far the Ethiopian Government would go to snuff out the democratic process in Ethiopia, but even we did not think it would go this far! Alas, we see that Marxists are unable to truly understand what it means to bow to the will of the people. We are shocked, shocked.

You may remember that on May 24, 2005, the European Union put out a statement casting doubts about the vote counting process.

Ana Gomes, the Chief Observer of the EU, then issued a damning condemnation of the process and of ex-President Jimmy Carter’s premature endorsement of the elections in a report leaked to the AP.

Unless there is a “drastic reverse toward good democratic practice” the observer team and EU “will have to publicly denounce the situation.

“Otherwise, the EU jointly with ex-president Carter will be held largely responsible for the lack of transparency, and assumed rigging, of the elections.”

Well, as situations unraveled and the world became appalled at the government’s killing of 42 unarmed people, it became apparent that the ruling party, the EPRDF, (which has Revolutionary Democracy as its guideâ€”a glorified neo-Marxist dogma) had lost the elections. 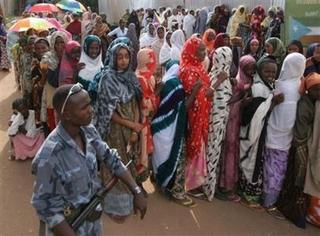 An Ethiopian federal policeman stands guard in front of women lined up to cast their ballots at a polling station in the Somali region’s capital city of Jijiga, Ethiopia, on Sunday, Aug. 21, 2005. (AP)

For months, the State owned Ethiopian TV has been embarrassingly used as a propaganda machine for the ruling party. This went out of control when on July 29, 2005, the Ethiopian News Agency made up quotes and attributed them to Tim Clarke, Head of the EU delegation in Ethiopia. Ooops. Weichegud, a widely-read Ethiopian blog, has all the gory details.

Mr. Clarke was unhappy and wrote a letter to the Ethiopian Information Minister stating that he has been misquoted. He also made the letter public. Major ooops. A government caught lying red-handed.

But it gets juicer.

The European Union is due to file its report about the Ethiopian Elections by mid September, and word on the street is that it will be pulling no punches. Panicked by this, the Ethiopian Government published an article last week ominously entitled, Gomes, Clarke: Neutral observers or hidden dealers?

Among the memorable lines in the article:

But to the disappointment of many of the people in Ethiopia, she becomes very rude in her handling of the situation.

Some times looking like the British General sitting on the Ashanti Stool during the colonial Africa and ordering the subjects to wash his legs.

Tim Clarke has been doing his level best to help his friends in the CUD. He was working hand in glove with them. While he condemns EPRDRâ€™s party leader, Bereket Simon in an open letter unfairly, he advises each and every EUD leader â€œyou guys grow upâ€

This is the state of democracy in Ethiopia today. 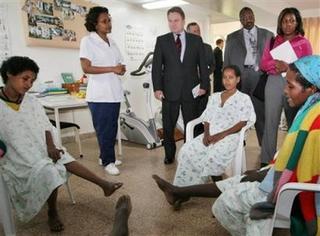 Chris Smith, a New Jersey Republican, third from left, during his visit to a hospital in Addis Ababa, Ethiopia Tuesday, Aug. 16, 2005. During his visit to Ethiopia, Chris Smith, said the Ethiopian government was taking too long to investigate the deaths of protesters during the post election demonstrations. (AP)

Mr. Bush promised the world that: “All who live in tyranny and hopelessness can know… the United States will not ignore your oppression, or excuse your oppressors. When you stand for your liberty, we will stand with you.”

71 million people are being help hostage by a government that can’t come to terms with losing. Yet, the main stream media still ignores this story.

We are coming to the sad realization that despite what Senator Lugar said of democracy, that maybe all democracies are not created equal.

Thank you Young Ethiopian Diaspora for keeping this story alive!