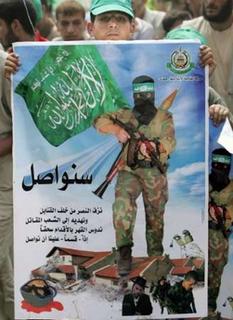 A Palestinian boy holds a Hamas poster during a rally to celebrate Israel’s imminent pullout from Gaza in front of the Jewish settlement of Neve Dekalim in the southern Gaza Strip today. (Reuters)

The implementation of the Israeli withdrawal from the Gaza Strip marks “the beginning of the end for Israel,” said Hamas political bureau chief, Khaled Mashaal.

Speaking to al-Hayat newspaper, Mashaal was quoted as saying on Tuesday that the Israeli withdrawal from the Gaza Strip as “the beginning of the end for the Zionist program in the region.”

The Hamas leader reiterated the movement’s commitment to the calm with Israel until the end of the current year, but added the “resistance is a strategic choice, because the withdrawal from Gaza is the first step in the way to complete liberation.” 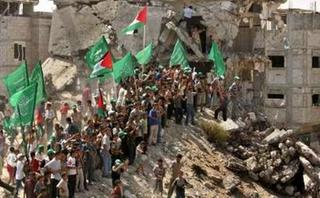 The Damascus-based official stressed that “Israeli Prime Minister Ariel Sharon wants the Gaza exit to be the first and last, and the payment for the continued control in the West Bank, settlement construction, wall construction, and the annulment of any possibility of establishing a Palestinian state within the framework of the Zionist project to end the Palestinian issue with the unlimited US support,” adding “We, however, see the withdrawal as first step for full liberation and achieving all of our legitimate rights. Today Gaza and tomorrow the West Bank and later every inch of the land.”

He stressed that the withdrawal from Gaza is the “beginning of the end for the Zionist project in the region and an important and historic turning point in the Arab – Israeli conflict.” 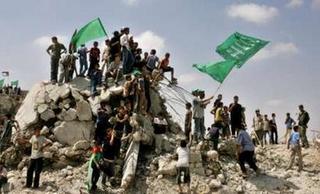 A picture of Yasser Arafat hung from a building nearby the settlement of Neve Dekalim on the edge of Khan Younis.

Hundreds of Hamas supporters gathered at the Kabeer mosque in Khan Younis, where they heard Younis al-Astal, a senior figure in the movement, castigate the Palestinian Authority for negotiating with the Israeli government. He claimed Hamas’ “resistance” was the reason Israel was leaving Gaza. “May God bless those who touch weapons,” he said.