More developments in Gaza present an omen for the infighting ahead… 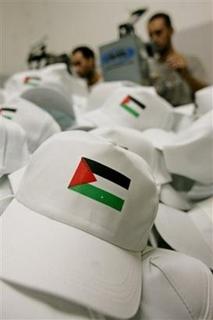 The battle between Palestinian leader Mahmoud Abbas and Hamas over who will get credit for Israel’s Gaza withdrawal is being fought in print shops, flag factories and back alley sewing workshops. (AP) Hamas even proposed its own poster contest this week. The winning poster must show how Hamas militancy drove the Israelis out of Gaza.

* Now is the time to get your entry ready for the Hamas poster contest! *

As Israel gets ready to leave the Gaza Settlements this month, Hamas is readying itself for its own celebration. You only have until August 10th to enter your poster depicting Jewish defeat and Hamas militant victory in their contest:

The design must portray the disengagement from the Gaza Strip as a victory for Palestinian militant groups – in particular, Hamas. The design must also show Israel’s “desperation and defeat.”

In recent weeks, the Palestinian Authority and Hamas have been competing for credit for Israel’s withdrawal from Gaza, each preparing elaborate celebrations, commissioning thousands of flags and frantically sewing clothing with their trademarks.

All entries must be handed in by the August 10th deadline, after which a committee of judges will choose the first prize winner, who will receive $250. Second and third prize winners will receive $150 and $100, respectively.

Hamas officials said they plan to hang copies of the winning poster throughout the streets of Gaza in preparation for pullout celebrations.

There is also news out today that Hamas foresees massive attacks as the next stage of their “conflict” with Israel:

A research center affiliated with Hamas has published a study concluding the Palestinian group is likely to launch rockets against towns in Judea and Samaria after Israel withdraws its Jewish communities from Gaza.

The study follows an announcement last month on Hamas’ official website that the group will continue its war to destroy Israel by launching Qassam rockets at Jerusalem, Tel Aviv and communities in Judea and Samaria.

All Things Conservative blog is reporting on Former Israeli Prime Minister Netanyahu’s warnings to Israel about what Gaza will become after the Jews leave the area.

And, it looks like Fatah is setting up their own army in anticipation of the Jewish departure.