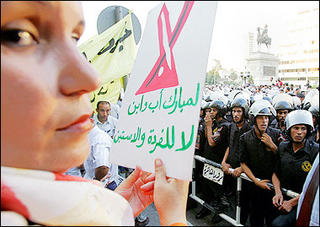 Arab poet Ahmed Fuad Negm spoke to demonstrators and to “All Arab Regimes” at a democracy protest on Wednesday in Cairo:

A 1,000 strong security force surrounded the 300-odd protestors who were brandishing banners or wearing T-shirts with slogans proclaiming “No to Mubarak,” “Freedom Now” and “Down with Mubarak”.

Opponents of Mubarak have stepped up their campaign against his 24-year rule of the Arab world’s most populous country ahead of the first contested presidential election in Egypt next month.

“The demonstration is a message to all Arab regimes who base their power on oppression from people opposed to monopolies and heriditary power,” said popular poet Ahmed Fuad Negm, referring to the likely succession of Mubarak’s son Gamal. 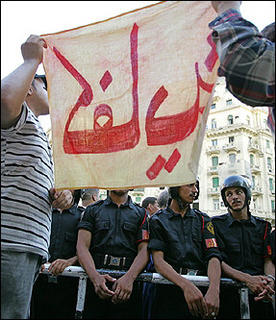 The US State Department condemned the violence at the protest on Sunday in Cairo:

On Saturday, Egyptian police and plainclothes men beat protesters with clubs as they demonstrated against Mubarak, who plans to seek a fifth six-year term in September elections.

State Department spokesman Tom Casey described that incident as “serious” and said Washington would discuss the issue with the Egyptian authorities.

In Wednesday’s demonstration, protesters were heavily outnumbered by riot police, as usual at Egyptian protests, but they were allowed to pass through the police cordon peacefully.

Freedom for Egyptians Blog says that authorities have been cracking down on youth since the bombings at Sharm Al Sheik. Over 8,000 individuals have been arrested since the attack at the Egyptian Resort.