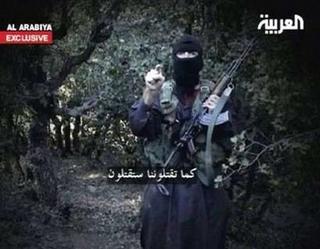 This picture was taken from a video released August 9, 2005. The video was given to Al Arabiya TV in Afghanistan and released on the Dubai-based television channel. Footage also shows the rocket attack on a Chinook helicopter that claimed the lives of 16 Navy Seals in June, 2005. (Reuters)

Although not leading a band of hundreds or even thousands of Arab fighters, which was commonplace in eastern Afghanistan in the late 1980’s, al-Masri is leading a renewed Arab insurgency sought to destabilize the internal Afghan political agenda as well as to threaten the fragile security associated with isolated Nuristan province. Kunar has seen an upsurge in violence as exemplified by last month’s downing of a MH-47 Chinook, killing all 16 on board, and the slaying of three US reconnaissance troops nearby.

During a telephone interview to local journalists, a purported spokesman for the Arab mujahideen fighting in Afghanistan, Abu al-Tayyib al-Djazairi, an Algerian, claimed the shooting down of the helicopter boosted the morale of Arab fighters and further entrenched their loyalty to the Taliban’s cause. He hinted Abu Ikhlas al-Masri was chosen by the Shura Council of Arab mujahideen based in Kunar and Nuristan provinces. Al-Masri has lived in the region for over twenty years and has a history of launching guerilla attacks in the area. An alleged well known Afghan-Soviet war veteran, al-Masri stayed in eastern Afghanistan after the jihad and married a local woman whom he has five children with.

After the fierce fighting in the mountains of Kunar, Afghan troops and US troops scouring the region found evidence of the Arab’s well established supply chain. A recent report indicated Pepsi soda cans and old running shoes were found dumped on a mountain side. This was most likely a staging area that was left behind before they ambushed the US recon team. Afghan intelligence speculates there are three hundred Taliban and Arab forces in and around Kunar, where as a majority of the forces, a few thousand, remain in the southern Provinces.

US led Coalition and Afghan forces killed a suspected Taliban leader in southern Afghanistan and three of his men it was announced today:

Payenda Mohammed, who was thought to have led about 150 rebels, was killed in a fierce battle in Kandahar province Wednesday, said U.S. military spokesman Col. James Yonts. He was believed responsible for numerous rocket attacks, ambushes and other guerrilla-style assaults.

At least three other militants were killed and 15 others wounded in the fighting, in which A-10 warplanes and attack helicopters bombed caves along a ridge where the militants had sought shelter and had stashed vehicles and weapons, Yonts said. No Afghan or coalition troops were wounded.