Egypt is just trying on democracy and already an opposition party member is attacking the Mubarak Regime. This bold move must have taken the audience by surprise (see Big Pharoah!). Voicing an opinion against the regime is not a common occurrence in Egypt,… especially on state run television! 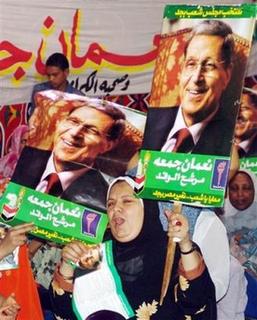 An Egyptian Supporter of Noman Gomaa, leader of Egypt’s oldest and largest opposition party ‘Wafd’, ululates as she holds his poster during his visit to Qena city, Egypt, late Thursday, Aug. 25, 2005. (AP)

Egyptian election season has officially opened and in a stunning development an opposition member attacked the Mubarak Regime… on state run televeision!

During the prime-time “State of Dialogue” talk show, veteran leftist Nabil Zaki ridiculed Mubarak’s vow to create 4 million jobs in the next six years, then he turned to Mubarak’s finance minister, sitting across from him, and accused him of taking the problem of unemployment too lightly.

“Mr. Minister does not seem to understand the social and psychological side effects of this dangerous issue,” he said.

That kind of direct criticism of Mubarak’s regime would never have been heard previously on state-run television Â one of the bastions of the unquestioned power he has held for 24 years. 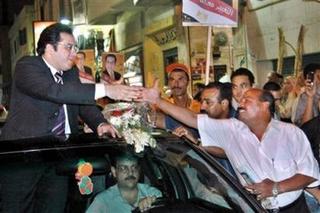 Egyptian Presidency candidate Ayman Nour, leader of the al-Ghad, or Tomorrow Party, greets his supporters during his tour at the Mediterranean city of Alexandria, Egypt, late Thursday, Aug.15, 2005. Ten candidates want to run in the country’s first ever multi-candidate presidential election on September 7, including veteran President Hosni Mubarak. (AP)

Television viewers are getting a treat with the political campaigning that is making its debut in Egypt:

For television viewers around Egypt, it looked as though Mubarak visited a local village to mingle with regular people, while they returned the favor with praise. “I swear to God, Oh Mubarak, that I am in love with you,” Mahmoud Fathy declared through a toothless grin.

But this was a one-off, a carefully scripted moment intended to make the president look like a man of the people, part of his campaign for election to a fifth six-year term. 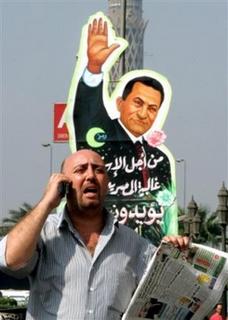 Egyptian President Hosni Mubarak still looms large in Cairo and is expected to win in a landslide in the upcoming presidential elections. (AP)

Egyptians may not be seeing presidential debates and national conventions, but this year’s election is something new for the country:

In the past presidential campaigns, Mubarak was the only candidate. This time, he faces nine other candidates.

The campaign season – a mere 19 days long before the Sept. 7 election – has set off a debate about whether Egypt’s first multicandidate presidential race is really an honest first step toward a more free and open political life in Egypt or merely a facade intended to preserve the power of the old guard.

But Egyptians are seeing things they have never experienced, and their leaders are taking incremental steps that are seismic in a society like this.

“He does things one tiny step at a time,” Youssef Boutrous Ghali, Egypt’s minister of finance, said of Mubarak. “He is not the man to take one bold step.”

Freedom For Egyptians blog has a few choice words for the leading candidate.

And, Big Pharoah is still stunned by the criticism of Mubarak aired on national television!