“The participation of women in politics is neither against Islam nor our culture … If women can work in fields or bring water from miles away, why can’t they work for the solution to their problems?” Bukhari says.

Bukhari is poised to retain her seat in Pakistani elections today. 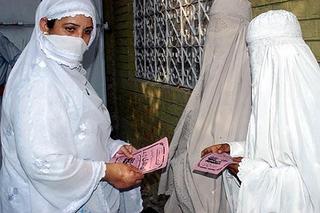 Nasreen Bukhari, left, campaigns on Wednesday, August 17, 2005 in Peshawar, Pakistan. Bukhari is nervously campaigning this week after receiving threats from opponents who, like many religious hard liners in country’s conservative northwest, prefer women should play no part in politics either as candidates or voters. (Hindustan Times)

Despite death threats, Nasreen Bukhari is determined to win back her seat on the local Peshawar, Pakistan Council:

When Pakistan holds municipal elections on Thursday, Nasreen Bukhari is a prime candidate to retain a seat on her local council. Since she won office four years ago, she has helped improve the water supply and sanitation, set up a new vocational training center for women and provided wheelchairs for the disabled.

Yet she’s been afraid to campaign this week after receiving threats from opponents who, like many religious hard-liners in the country’s conservative northwest, prefer women to play no part in politics — either as candidates or voters.

Bukhari, 48, a university graduate and mother of four who runs a women’s development charity near the region’s main city, Peshawar, says supporters of some rival candidates paid her an unwelcome home visit on Sunday.

“They even threatened me not to campaign and bring females to the polling stations, otherwise bloodshed will occur,” she told The Associated Press. “I am so harassed and worried. Now I cannot campaign openly.” 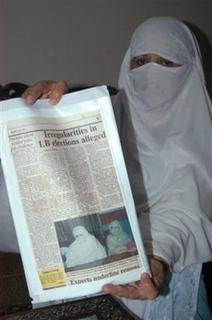 Many of the seats held for women are going uncontested in this region of Pakistan:

Particularly in the conservative North-West Frontier Province, bordering Afghanistan, hundreds of the women’s council seats are going uncontested. Pashtun tribal tradition dictates that communal decisions are made in exclusively male tribal “jirgas” or gatherings. It’s considered dishonorable for women to mix with men outside immediate family or to venture much outside the home.