Morocco slaps a huge fine on its most progressive magazine. 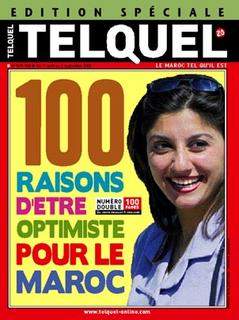 …Or Does It Explode sends this news about the recent crackdown in Morocco on progressive magazine TelQuel.

One of the most positive recent developments in Morocco has been the rise of TelQuel Magazine, a French-language weekly publication that regularly push the envelope in shocking ways. Most prominent was a massive cover story a few months ago detailing King Muhammad VI’s salary (right). Other taboo-breaking cover stories have included pieces on re-interpreting the Quran, homosexuality in Morocco, and the country’s drug sub-culture.

For a while, TelQuel’s groundbreaking and thrilling journalism seemed to be a sign of progress toward genuine freedom of expression in Morocco – albeit with an unquestioning respect for the king’s right to rule. But yesterday Moroccan courts slapped the magazine with a 1,000,000 Dirham ($112,000, massive by Moroccan standards) fine and arrest warrants for a staff writer and the editor-in-chief if they fail to pay.

The background is quite ridiculous. About two months ago, an opinion column in the magazine criticizing the national parliament noted in passing that one politician was a former dancer. The column didn’t mention the legislator by name, but the woman (indeed a former dancer) sued for character defamation.

This story is yet to get play in the Western Press or by Freedom Advocates. Let’s hope this story gains more traction. It would be a shame if a publication like this would go under because of government bias.