* Violence is escalating in the town of Yandyki between the ethnic Kalmyks and Chechens. *

Clashes broke out between ethnic Kalmyks and Chechens in Kalmykia, the only Buddhist territory in Europe:

Both Kalmyks and Chechens are coming together in the town from areas throughout the southern region, while police, special forces and interior troops have gathered to try to prevent further conflict. And while law enforcement is saying that they have the situation under control, everyone is bracing for a new, more lethal outburst of violence.

On Friday, the Astrakhan region settlement of Yandyki, the site of massive unrest on Thursday, was surrounded by the military and special forces. Roads into the area have been blocked off by military servicemen and interior troops. An group of investigators is working in the area trying to determine what caused the massive street fight between Kalmyks and Chechens. Also on Friday, deputy Prosecutor General Nikolai Shepel arrived on site to take matters under his personal control.

The conflict between the Chechens and the Kalmyks began in Yandyki in February. The town is a small settlement of about 3,500 people. Among those, 237 are ethnic Chechens, and 288 are ethnic Kalmyks. On February 22, three drunk Chechens — Isa Magomedov, Yusup Abubakarov, and Adlan Khaladov desecrated a local cemetery. Since then, the town has suffered from periodic clashes between the Kalmyks residing in the town and the Chechens from the outskirts. One of those clashes — on the night of August 15 — ended in the death of a local resident. 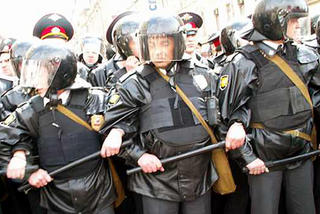 Military and special forces were sent into the area.

The Kalmyks rioted after the funeral of Nikolai Boldyryov who was shot earlier in the week and viciously attacked the Chechens in the nearby village:

According to law enforcement authorities, on that day about a hundred Chechens arrived in the town and incited a massive street fight with local residents. At a local bar, about 25 Chechens attacked 24-year-old Nikolai Boldyryov. Boldyryov ended up getting shot in the head. Afterwards, riot police detained 14 people who had been involved in the fight. Local prosecutors launched a criminal case. Meanwhile, Boldyryov’s funeral on August 18 was attended by about 100 friends and relatives from a nearby town in Kalmykia, the predominantly Buddhist republic north of Chechnya.

After the funeral, the Kalmyks grew even more aggressive, and were joined by local residents, forming a 300-strong crowd that went through the town beating Chechens and setting fire to their homes.

Six homes were burnt down in the violence:

Five people were hospitalized with different injuries of various degrees. Six homes burned down and another two were damaged by the fire.

One suspect was arrested on charges of hooliganism and another 11 people were arrested for administrative offences.

The villagers want the Chechens evicted from the area.

The Chechen homes were burnt to the ground:

Once the funeral ceremony was over, the crowd of locals and visitors passed along the village, beating Chechens and putting their houses on fire. As a result, five people, including a policeman, were hospitalized, eight houses were burnt, six of them to ashes, two cars crashed.

Now the Chechens and Kalmyks are coming by cars and trucks to the village, representatives of local authorities said. “New riots may happen.”