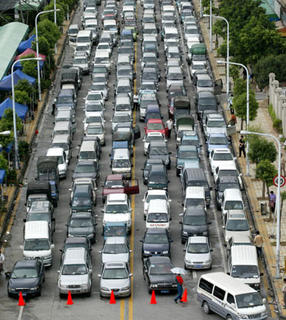 China has sent in police support to help out at filling stations in Guangdong province:

The Chinese government has sent thousands of police to petrol stations in the southern city of Guangzhou to prevent social unrest as drivers scramble to fill their tanks, the Hong Kong Economic Times reported on Thursday.
The paper said authorities had sent a large number of public security officers as well as paramilitary police to fuel stations amid fears that the latest fuel shortage could spark social instability.

“Several thousand public security officers and paramilitary police have been stationed at the 547 filling stations across Guangzhou in recent days,” the paper said. 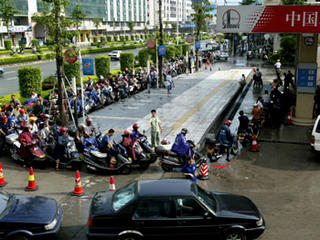 The government’s fear of losing political control may be part of the reason for the gas shortages:

The Chinese government and its state-owned oil companies are locked in battle over artificially low gasoline prices at the pump that has caused a massive shortage in the southern manufacturing province of Guangdong.

For weeks skyrocketing global oil prices and rising demand has led to a fuel-supply crunch as domestic refineries have been caught short in Guangdong.

Some fear it is only a matter of time before gas-guzzling cities such as Shanghai are hit too.

The government has blamed recent stormy weather for the shortfall, which is feasible but not enough to result in the kilometre long queues at filling stations that drivers in Guangdong have endured for nearly a month.

The crisis highlights the persistent problems Beijing faces as the economy is transformed to a more market-based system but that is often retarded by authorities who fear loosing political control in the face of full-fledged capitalist rules. 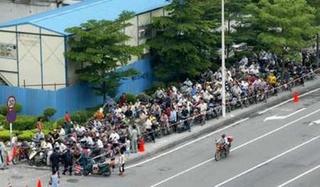 China, the world’s second-largest energy consumer, aims to increase the use of gas to 8 percent of its energy mix by 2010 from 3 percent now, in part to help clear skies choked by smoke from coal-burning generators.

Gas from the Guang’an field is expected to be easy to recover and of a high quality, but it is too early to say when it can be recovered, the official added.

Update: (Thursday PM) Barcepundit has it figured out. Well, at least he has one explanation. (via Glenn Reynolds)

For more on the Asian Gas Crisis go… HERE