Hugo says he will take his case up with the UN and may even have Robertson extradited to Venezuela!

Venezuela’s president says his government will take legal action against a US TV evangelist who called for US agents to kill him. Hugo Chavez said Venezuela might even seek to extradite Pat Robertson. He also warned he would complain to the UN if the US failed to take action.

Mr Robertson has apologised for his comments, which came amid already tense US-Venezuela relations.

On a visit to Venezuela, Mr Jackson denounced Mr Robertson’s assassination call as immoral and illegal.

He called on the US Justice Department to investigate the matter.

Jesse went to lend support to Chavez on Sunday. 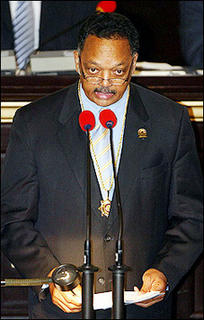 US civil rights activist Reverend Jesse Jackson delivers a speech before the National Assembly in Caracas. Jackson branded ‘repugnant, immoral, illegal’ a call by a US televangelist for the assassination of Venezuelan President Hugo Chavez. (AFP)

Jesse Jackson rebuked claims that Venezuelan President Hugo Chavez was a threat to the stability of the region:

Relations between Venezuela and the United States, strained since left-winger Chavez first won office in 1998, have deteriorated in recent weeks after Defense Secretary Donald Rumsfeld repeated accusations during a South American tour that Chavez was fomenting regional instability.

Chavez had Jackson flown to Venezuela!

Chavez had sent a private jet the day before to Chicago to bring Jackson to Venezuela. The trip had been planned for weeks and might have passed relatively unnoticed outside of Caracas had Pat Robertson, the host of a popular television show of his own, not advocated last week that the United States “take out” Chavez. Robertson later apologized.

Sunday was a busy day in Caracas for Jackson and his party, which included his daughter Jackie, son Jonathan, University of Maryland political scientist Ronald Waters and a state senator from Texas, Rodney Ellis, who is on the board of Jackson’s national Rainbow/PUSH Coalition.

He (Jackson) said that if in our lifetime the Berlin Wall can come tumbling down and Nelson Mandela can walk out of prison after 27 years, then “One day we can look forward to President Chavez and America’s president to exchange visits. The people deserve it. Leaders with the most courage and vision take the most initiative.”