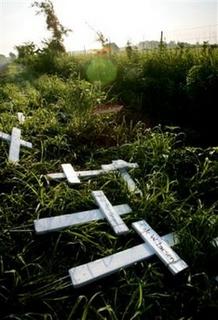 Aren’t you the same bunch that goes ballistic demanding displays like this be removed from public grounds?

It is funny how the left is putting up crosses one day and attacking Catholic John Roberts, who gets a well qualified rating from the ABA, the next day for his Christian beliefs.

Which brings me to a classic Trey Jackson video interview of a liberal protester:

TREY JACKSON has video he took himself of a liberal in Tennessee this past weekend discussing John Roberts. It is just brilliant!