SMALL HOME-MADE BOMBS CAUSED GREAT DAMAGE IN BANGLADESH,
BUT THE DAMAGE COULD HAVE BEEN MUCH WORSE! (see update 1 below)
VIDEO HERE 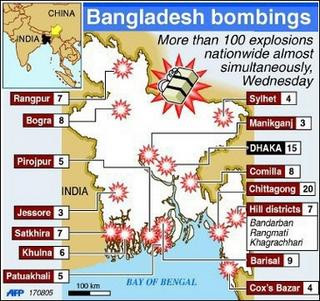 The map shows the location of the towns and cities hit almost simultaneously by small bomb explosions. About 350 small bombs exploded within an hour of each other across Bangladesh. (AFP)

The bombs killed a rickshaw driver and a 10 year old boy. 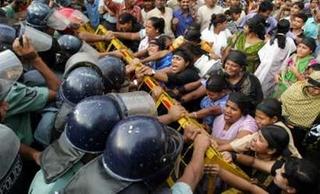 Women protesters from the Awami League Party fight police after the panic from the bombings earlier in the day in Bangladesh. (Reuters)

The bombs that killed two were planted by Islamic militants and injured more than 125:

About 50 people were arrested, a state-run news agency reported. There was no claim of responsibility, but leaflets from a banned group seeking the imposition of Islamic law were found at many scenes.

Police said the bombs apparently were designed to cause limited damage. The blasts killed a bicycle rickshaw driver in the northern town of Chapainawabganj and a 10-year-old boy in the central town of Savar. 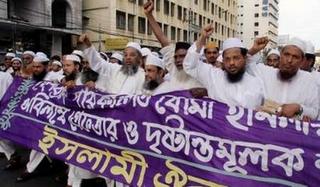 Activists of the Bangladeshi Islamic group ‘Islamic Islami Okeya Jote’ march during a protest against the bomb blasts in Dhaka today. (Reuters)

Neighboring India was concerned about the coordination of the bomb attacks:

Bangladeshi police said leaflets found near the scene of some of the blasts were signed in the name of banned extremist group Jamayetul Mujahideen and called for the implementation of strict Islamic law.

In May India said it was concerned at what it called the rise of Islamic fundamentalism in Bangladesh. 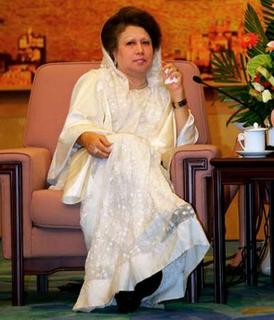 “I want to say that the attackers are enemies of the country, people, peace, humanity and democracy,” BSS quoted her as saying on Wednesday.

The blasts began 90 minutes after the premier left Bangladesh on a five-day trade-focused visit to China. It was not known whether she would cut short her trip.

Global Voices Online has more on the story from bloggers in Bangladesh.

When around four hundred small bombs explode in 63 districts out of 64 districts of a country simulteneously it shows what kind of network the attackers possess (imagine 50 states out of 51 in US).

The mostly hit city was the capital Dhaka with around 30 bombs explosions including key installation like the Zia International Airport, Supreme Court, Secretariat etc.

The casualties and injured numbers are so far incredibly much less (2 deaths and 150 hospitalized). The question may be why is that. The bombs were confirmed as small IEDs (Improvised explosive device) containing not much explosives.

From the TV reports of the unexploded ones I have seen that each contained four batteries and some small devices and a switch attached to the bomb by red tape. Most probable the switch activated the delay device and it exploded sometime later allowing the carrier to leave it and flee away.

The most remarkable thing of these bombs is that they contained wood saw dust instead of splinters. That is why there are fewer casualties although they were exploded at manned places. Actually many received minor wounds of saw dusts hitting the body with the power of explosion and went home after emergency medical attention. If these were loaded with more explosives and deadly splinters, we could have seen thousands of dead people.

Free Thoughts is noting the high number of bombings in Bangladesh in the past six years.

Update 3: Austin Bay adds that one of the targets is The Grameen Bank, a micro-development lender. He has more.