A BOMB BLAST WENT OFF IN A WESTERN OFFICE IN TEHRAN TODAY,
VIDEO HERE

A bomb blast went off in an office building in Tehran that houses British Airways, BP Oil firm and DaimlerChrysler. The bombing took place a day after the EU gave Iran strict warnings about restarting its sensitive nuclear activities.

More on the bomb blast HERE. 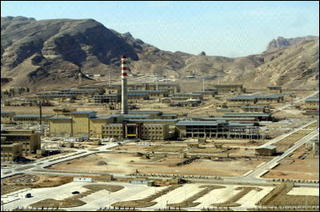 Iran defiantly took the first steps towards a resumption of sensitive nuclear work which risks plunging talks with the European Union into crisis. The EU gave Iran a strong warning yesterday:

The European Union issued a sharp warning to Iran, saying it risked unspecified consequences if it makes good on its threat to resume sensitive nuclear activities in breach of a deal currently under negotiation.

“Were Iran to resume currently suspended activities, our negotiations would be brought to an end, and we would have no option but to pursue other courses of action,” the foreign ministers of Britain, France and Germany and EU foreign policy chief Javier Solana wrote in a joint letter made public by French officials in Paris.

The French and US governments earlier Tuesday said that the issue would be taken to the UN Security Council for action if Iran refused to abide by the deal, known as the Paris Agreement, under which Tehran said it would suspend its nuclear programme in exchange for trade benefits from the European Union.

Britain, France and Germany, which spearheaded the negotiations on behalf of the EU, have all expressed alarm at Iran’s move.

Also, a questionable review came out today in the Washington Post claiming Iran is 10 years, not five years, away from a nuclear bomb. Roger L. Simon is commenting on the article.

And,… Stefania from Free Thoughts has news of an Islamist judge being sprayed with bullets on his way home from work today in Iran.

And,… to top off your “Iranian News of the Day” … Trey Jackson has video of Iranian President-Elect Mahmoud Ahmadi-Nejad’s views, including this line – “Islam will conquer all the mountain tops of the world.”