** Moscow News is reporting on a possible outbreak of rabbit fever in Russia! **

Moscow News is reporting that there may have been a Bio Leak of rabbit fever, or tularemia, a rare dangerous disease in Central Russia!

An outbreak of rabbit fever, or tularemia, a rare dangerous disease, registered recently in the Volga provinces of Central Russia, could have been caused by a leak from biological warfare facilities present in the area, a U.S. Website surmised Thursday.

Earlier this week, Russian news agencies reported on dozens of cases of tularemia registered in Russia since early August. From Aug. 4 as many as 96 people including 15 children sought medical assistance at hospitals in Dzerzhinsk, Nizhny Novgorod and Ryazan.

Earlier this week, the authorities said the outbreak had been successfully contained.

However, reports on recent cases of tularemia caused concerns in the U.S. where some media outlets surmised the outbreak may have resulted from a leak of deadly substances from biological warfare facilities present in the affected provinces.

“What makes it notable is that tularemia is a fairly rare disease. Thus, the Ryazan area had only four known cases in 2004,” the PHXNews Website wrote.

There was more news this week at Red Nova on the Soviets bioweapons program:

The lack of modern biosafety equipment is also raising concern among U.S. officials about the potential for an accidental release of deadly bacteria and viruses. In Odessa, where 44 scientists and about 140 support staff carry out research in the I.I. Mechnikov Antiplague Scientific and Research Institute, scientists wearing cotton smocks and surgical masks work with lethal microbes that in the West would be locked away in high-containment laboratories and handled only by scientists in spacesuits.

The lab’s scientists said their training in handling dangerous materials allowed them to work safely with pathogens without Western-style safety equipment — which they viewed as unnecessary and which in any case they cannot afford. 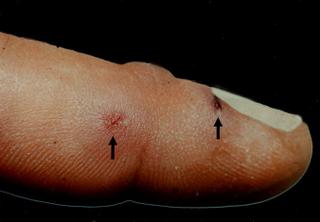 There are two common ways that humans can contract tularemia:

* From the bite of an infected tick, deerfly (Chrysops discalis), or mosquito. When transmitted to humans by insects, exposed body surfaces are bitten, and the on set of pain and fever is sudden.

* When broken skin (cuts, abrasions) comes into direct contact with an infected rabbit carcass (namely rabbit species of the genus Sylvilagus which are the cottontails).

(Less common means of spreading the disease are drinking contaminated water, inhaling dust from contaminated soil, or handling contaminated pelts or paws of animals. Human-to-human transmission of tularemia is uncommon.)

Since 9-11 the US has been studying rabbit fever as a potential bioterror weapon:

“Sept. 11 and the anthrax scare really woke up the U.S. government as to how vulnerable we are,” Klose said. “Anthrax got a lot of attention, but tularemia is just as dangerous as anthrax.”

The culprit is Francisella tularensis, bacteria that can be carried in the bloodstream of various mammals without making them visibly ill.

At this point there is no other news about this outbreak in Russia that I can find. I will keep this post updated if I see any more on this disease.