(I realized “Horror in Bavaria” for a title to this post may be a bit over the top!) 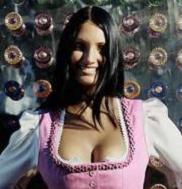 A new law in Europe may outlaw the dirndl worn by barmaids in Germany!

Boinky, in the Philippines is reporting this sad news from Europe.

Under the European Union’s Optical Radiation Directive, which is to be voted on in the European Parliament next month, employers face heavy fines if they fail to protect their employees against the risk of sunburn.

Dr. Boinky may have found the solution to this madness. She advises the dear barmaids to rub on sunscreen to prevent redness. Brilliant!

Update: (4:30 PM CST) Trey Jackson is outraged with the news!

I wonder what German blogger Davids Medienkritik has to say about this travesty? My bad… he already made his feelings known.