It’s Over for President Maaouya Ould Sid’Ahmed Taya in Mauritania!

While President Maaouya Ould Sid’Ahmed Taya was away at King Fahd’s funeral, a coup attempt was underway back home! 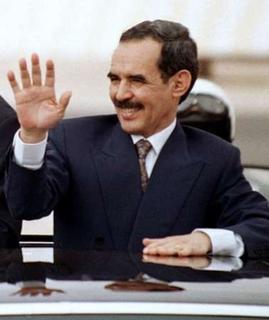 Mauritania’s armed forces have set up a military council to rule the country and put an end to the “totalitarian regime” of President Maaouya Ould Sid’Ahmed Taya, a statement on the state news agency said on Wednesday.

The statement, signed by a so-called Military Council for Justice and Democracy, said the council would rule the Islamic republic for two years:

“The armed forces and security forces have unanimously decided to put a definitive end to the totalitarian activities of the defunct regime under which our people have suffered so much over recent years,” the statement said.

“This council pledges before the Mauritanian people to create favorable conditions for an open and transparent democracy” it said.

Earlier today it was unclear as to what exactly was happening in the capital of Nouakchottit. It was not known if the coup attempt succeeded or failed:

Soldiers surrounded Mauritania’s state radio on Wednesday and blocked off streets in the capital while President Maaouya Ould Sid’Ahmed Taya was out of the country, in what a diplomat said could be a coup attempt.

Gunfire rang out briefly near the presidency building in the capital Nouakchott. Taya was out of the country after attending the funeral of Saudi Arabia’s King Fahd in Riyadh on Tuesday.

“We have heard that there has been a coup d’etat but we don’t know who’s involved. We don’t know whether it is something that has succeeded or failed,” Sid Ahmed Abeidna, the British honorary consul in Nouakchott, told Reuters.

The French embassy in Nouakchott said it was monitoring the situation in the former colony but declined to comment further.

Taya, who is a supporter of the US in the War on Terror, has survived coup attempts in the past:

Taya has survived several coup attempts during his 20-year reign, but only the 2003 effort to overthrow him had made it past the planning stage, marked by several days of street fighting in the capital.

He implemented a crackdown after that against members of Islamist groups and the army, jailing scores of people accused of plotting to overthrow him. His government also has accused opponents of training with al-Qaeda linked insurgents in Algeria.

A June 4 border raid on a remote Mauritanian army post by al-Qaeda-linked insurgents sparked a gunbattle that killed 15 Mauritanian troops and nine attackers. Algeria’s Salafist Group for Call and Combat claimed responsibility for the attack, saying in a message on a Web site that the assault was “in revenge for our brothers who were arrested in the last round of detentions in Mauritania.”

Mauritania, a sparsely populated nation on the northwestern edge of the Sahara, is strictly regulated by Taya, who took power in a 1984 military coup and tried to legitimize his rule in the 1990s through elections the opposition says were fraudulent.

While the president was away, troops seized radio and government offices:

Presidential guard troops in Mauritania’s capital took control of the national radio and television stations Wednesday and seized a building housing the army chief of staff headquarters while the president was out of the country, witnesses said.

Heavily armed soldiers deployed in force around the presidential palace, ministries and other strategic buildings and on the streets of the capital Nouakchott, blocking key roads and several entrances to the city, an Associated Press reporter on the scene said.

Half a dozen shots from a heavy gun were heard at midmorning but it was not immediately clear where they came from and no other violence was reported.

It was not immediately clear whether the moves signaled a coup attempt was under way.

Update: Robert Mayer at Publius Pundit has reaction to the coup today and Indepundit has more on Mauritania.

And, All Things Conservative explains why Mauritania matters.