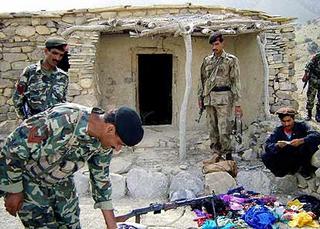 Pakistani army soldiers examine weapons which were recovered following a raid on a madrassa (religious school) at Dandi Kuch, an area located 11 kms northwest of Miranshah, the main town in the North Waziristan region, close to the Pakistan-Afghanistan border, on August 21, 2005. (Hindustan Times) 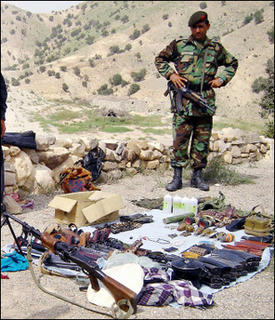 A Pakistani soldier stands beside recovered weapons following a raid on a madrassa in western Pakistan. (AFP)

The terrorists were using the cover of the madrassa for their own activities:

The raid on a deserted compound which was designed to look like one of Pakistan’s thousands of religious schools happened late Sunday near Miranshah, the main town in North Waziristan region, it said.

“The compound was being used as terrorist den and security forces carried out a search following a tip-off by locals that suspected militants visited the compound,” the military said in a statement on Monday.

During the search the troops recovered grenades, fuses, guns, binoculars, daggers and commando uniforms, as well as female costumes and wigs, it said.

“The madrassa had been established in an unpopulated location and is an attempt on part of terrorists to use the cover of religious places for sabotage activities,” the military said.

In a “related development”, security forces arrested seven suspected terrorists from Mera Din town in Shawal Valley in the tribal belt while three others were held from various places in the area near the Afghan border.

The detainees were all aged between 18 and 25 but their identities could not be established immediately, the military said. They were handed over to security agencies for interrogation, the statement added.

Last week after 400+ bombis went off killing two individuals in Bangladesh. Officials arrested at least one madrassa student carrying an Osama bin Laden video training tape. Over 100 individuals were arrested and other bomb making paraphenalia was seized during the arrests.